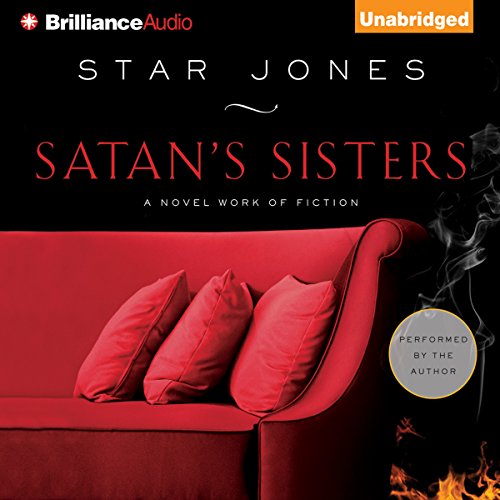 A Novel Work of Fiction
By: Star Jones
Narrated by: Star Jones
Length: 10 hrs and 24 mins
Categories: Fiction, Chick Lit
3 out of 5 stars 3.1 (52 ratings)
This title is included in Audible Escape

Set in the bright lights of daytime television, Satan's Sisters is the story of The Lunch Club – a long-running, popular ladies' talk show in which alliances are forged, careers are made, and bridges are burned. The show's famous red couch is ruled by its esteemed matriarch, Maxine Robinson, the first African-American to become a network news anchor, who maintains a hidden safe of diaries chronicling others' indiscretions for posterity – and leverage as needed. But even all-knowing Maxine is caught off-guard when former co-host Heather Hope, now a superstar, makes a ratings-gold guest appearance only to announce a bombshell: the imminent inside scoop straight from the mouth of another ousted member of The Lunch Club's inner sanctum. Self-described "southern belle" Melissa "Missy" Adams has written an explosive tell-all exposing all the Lunch ladies' secrets, and she's going to reveal it on Heather's show; but the story is bigger than just the two of them.

Delving into the murky waters of each of the current five co-hosts' lives – and the loved ones, lovers, and support team surrounding them, Satan's Sisters dishes the dirt while serving up laughs, suspense, solidarity, and heartbreak. The Lunch Club's beleaguered publicist is assigned to track down the embargoed manuscript and assess the potential damage to everyone's livelihood... but time is running out, and there's now a new mole spilling details of the show's private panic mode. Looks like Maxine is going to have to take things into her own hands. But can even she escape becoming collateral damage?

This was a wonderful getaway from my day

such a splendid narrative and rich layered characters. I felt like a fly on the wall at times. Star Jones is a beast and may be the new Jackie Collions, rest her soul, for the next generation of steaming celebrity gossip mongers ready to read about the rich and famous. She's got daytime on lock with this work right here. Maxine is a monster you'll enjoy hating, and the show behind the show is hilarious.

You've gotta try this one out if you haven't already. if you have, read it again, you may have missed something.

Entertaining. It was hard to keep up with the characters in the beginning. And some characters were not as developed as others.

I hated it. Was so excited, but just couldn't follow it. Too confusing. Sorry Star, but you should have hired a professional author to read it.

This probably could have been a fun read, but this audio version ...if only it had been recorded by someone other than Star Jones. Her personal vendetta seeped through her words with a sting reserved for enemies which left one sitting on the fourth wall of this production as she shattered it with the sharpness of her tongue.

loves it, kept my attention all the way. can'wait for the show on VH -1

Just couldn't get into it!

What would have made Satan's Sisters better?

If you could tell who Star Jones is talking about

What was most disappointing about Star Jones’s story?

Didn't get too far into the book it was just too hard to follow who she was talking about for some one who watches the View everyday the book was not all that from what I read.

I could not find a character to root for.
I guess because there were no believable characters.

Love it and would recommend to family and friends to read and enjoy. Great job

Not quite what I was expecting

I only bought this book because I read an article where Vanessa L. Williams was interviewed and she said this book was to become a film. I like Vanessa a lot so I got the audiobook. It wasn't quite what I was expecting. It seemed cliche: lots of people hiding things for reasons that don't seem real clear with steamy sex scenes, but most everyone still manages to keep a significant form of employment and move on with their lives. I was disappointed when I finished listening. I just kept wondering, is this it?

no, not crazy about the drama and the sex scenes; some say this book was based on real events. Somehow I felt I had met these people before and the secrets they were hiding seemed too different from decisions that I would make. I guess to be a good movie or tv show these days it has to be heavy on steamy sex scenes and scandals. For some reason, I feel like I have simply had enough of this type of story.

It was just okay.

The narrating was a little dry. The story was predictable. It was an okay read.