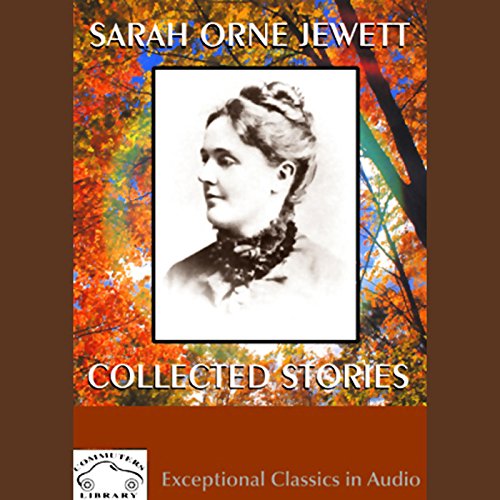 Special effort was made to capture the dialect in these seven gems carefully lifted from the treasures of life in New England at the turn of the century.

Included are:
"Miss Tempy's Watchers", in which two friends, one poor, one well-to-do, sit up with the body of their common friend.
In "Going to Shrewsbury", sad but hopeful, Mrs. Peet found herself without a home and aboard a train bound for Shrewsbury.
"Martha's Lady" is a wonderful story about the bond that develops between two young women, one a visiting cousin, the other an awkward maid who has just been employed.
In "Miss Esther's Guest", Miss Esther has decided to perform an act of charity and allow a poor elderly city dweller to visit for a week; but she wasn't expecting a man.
"The Only Rose" is a touching story about a woman who must decide which of her three deceased husband's graves is to have a rose.
In "Aunt Cynthy Dallett", two old friends walk up the hill to visit Aunt Cynthy and reminisce along the way.
"The Flight of Betsy Lane" was a favorite story of Willa Cather. It tells of three friends at the poor house and the adventures of Betsey Lane.
In "Hilton's Holiday", two young girls ride with their father in his best wagon, making their first trip to town. This was Sarah Orne Jewett's favorite story.

"To read Sarah Orne Jewett is to peep into the windows of rose-trellised cottages. What a wonderful introduction to Maine writing!" (AudioFile)

Simply the most satisfying and relaxing stories

If you could sum up Sarah Orne Jewett in three words, what would they be?

The Watchers at the house of the deceased speaking through a long, companionable night and revealing their own characters as well as that of their dead friend.

All of the stories are accessible and remind us of our common humanity across generations and cultures.

If you could rename Sarah Orne Jewett, what would you call it?

I think she is fine with her name.

Whenever I feel the need for a sympathetic, loving voice, I listen again to Tana Hicken narrate these wonderful stories.

If you enjoy Willa Cather - you will enjoy these simple but moving tales of life in rural New England in the latter half of the 1800s.