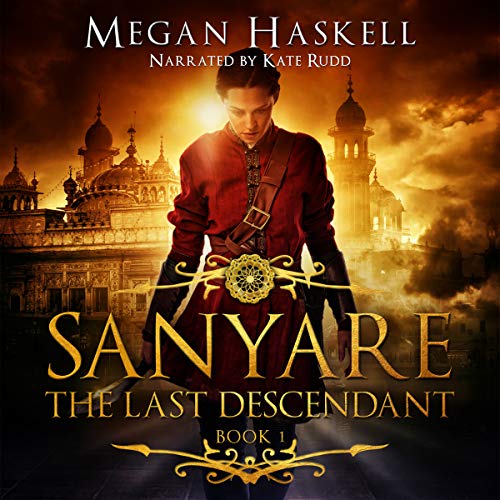 By: Megan Haskell
Narrated by: Kate Rudd
Try for $0.00

A woman torn between honor and survival....

Raised in a realm where humans are no better than slaves, Rie Lhethannien has struggled for decades to earn a meager post in the High Court messenger service. Even training as an elite fighter isn't enough to earn the respect she craves. Scorned by the high elves who rely on her loyalty, Rie's closest allies are the fierce carnivorous pixies who travel by her side.

When she's attacked on a routine delivery by assassins from the enemy Shadow Realm, Rie's martial prowess keeps her alive...and frames her as a traitor. Facing execution at the hand of an unmerciful high elf king, Rie must forsake her oaths and flee into enemy lands to prove her innocence. The secrets she uncovers may threaten more than her honor or even her life...for war is looming in the nine faerie realms.

Sanyare: The Last Descendant is the first book in The Sanyare Chronicles, a fast-paced dark fantasy adventure. If you like kick-butt heroines and action-packed fantasy filled with mythological creatures, then you'll love the first novel in Megan Haskell's debut series.

What listeners say about Sanyare: The Last Descendant

I had no idea what to expect from this book or this author. I was hooked from the beginning and listened to the book in one day. I can't wait for the next book.

Let me start by saying that I am a sixty year old female who doesn’t normally gravitate to fantasy books. That being said, this book was the highlight of my month. The author wastes no time involving the reader ( listener) in the story, which starts off with a bang. The narrator ( Kate Rudd) was excellent and performed the characters with such precision that all of them came to life as I was listening. The female lead is a strong young woman who is interesting and capable. I thoroughly enjoyed going with her on her journey to exonerate herself and find her ancestry. Megan Haskell did an amazing job of taking me away to another realm while still telling a believable story. The ending was very appropriate. I highly recommend this for all ages and genders!!

Phenomenal. Absolutely great and riveting start to finish. I hated putting it down. even got angry that I could not read or listen when it was time engage humans