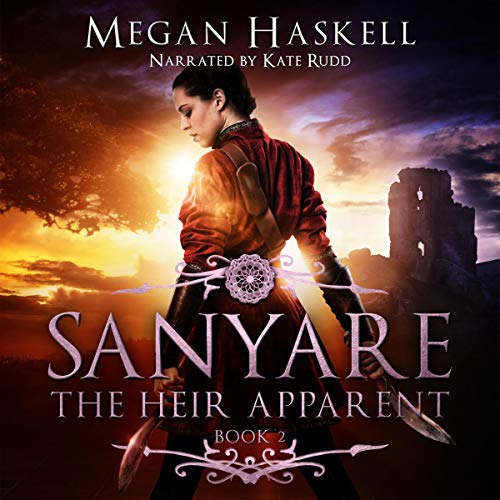 By: Megan Haskell
Narrated by: Kate Rudd
Try for $0.00

Her secret is unraveling. One dangerous quest could end it all....

Rie thought she was an ordinary human. After she’s named heir to Sanyaro, the truthseeker and mediator of all nine realms, life becomes a lot more complicated. As she struggles to control her magics, Rie nearly falls prey to a brutal assassination attempt during a public ceremony.

Blamed for the chaos, Rie’s escort, Prince Daenor, is taken prisoner. While Sanyaro tempers the political flames, Rie must once again chase after the truth. As if the threat of another great war and the impending death of her lover weren’t enough, Rie uncovers a dark secret that threatens to crack the very foundations of the faerie realms. When allies fall, can Rie overcome the odds…and the opposition?

Sanyare: The Heir Apparent is a captivating dark fantasy adventure novel. If you enjoy thrilling adventures across nine unique realms filled with wise-cracking carnivorous pixies, then you’ll love the second installment of The Sanyare Chronicles from Megan Haskell.

What listeners say about Sanyare: The Heir Apparent

Where is the confident heroin from the first book? This follow-up to her brilliant first book took 10 steps back turning the main character we grew to respect into a self deprecating, constantly doubting herself in winded inner monologues throughout the entire book.

I was really looking forward to watching her continue to mature her character but she turned into an insecure whining adolescent. The story became disjointed with obscure twists and turn. Not only was the story hard to follow but the constant self loathing inner dialog at every point was a profound let down.

I really HATE to give a bad review as the first book was incredible but this book didn’t even feel it was written by the same author. I feel terrible for Megan.

hopefully they put book 3 and 4 on audio

a very good series book 1 and 2 hopefully they do book 3 and 4 on audio if they do I will be getting the other two books to complete the series but I have noticed sadly some serious don't complete on audio this is a shame I got really into these books and would enjoy to listening to the final two books to complete the series so hopefully they put book 3 and 4 on audio.