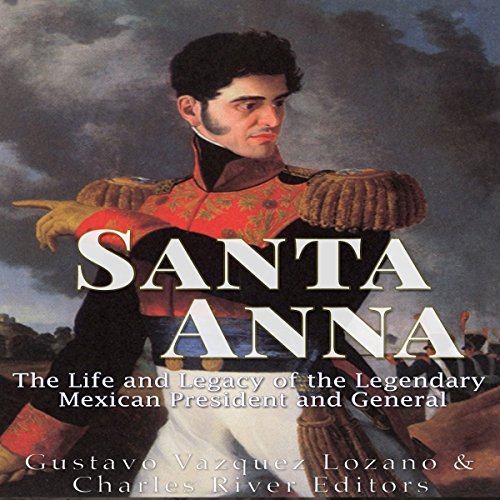 The butcher of the Alamo and Goliad. The traitor who sold half of Mexico. The Napoleon of the West. Mr. Fifteen Nails. The Mother Country's seducer. Almost 150 years after his death, a lot of name-calling is still being directed towards Antonio López de Santa Anna, president of Mexico 11 times in the 19th century, and today, the vast majority of his compatriots consider him the greatest traitor in history. It was not like that in his day; actually, there had never been a more popular man in Mexico, or anyone more eulogized and essential than General Santa Anna. In life he was the most famous - and at intervals most infamous - Mexican general and politician. Justo Sierra, the eminent writer and historian who watched him when he was a child, wrote that the masses came to regard him as a Messiah: "The people had a vague confidence that he could do miracles." Sierra wrote that Santa Anna was "the indispensable man, the man for our times of crisis, our deus ex machina." The political factions that rose against him and sent him into exile a couple of years later were knocking at his door begging him to come back when the nation was coming apart at its seams. Then Santa Anna returned to Mexico, and he seduced her, united the people, and formed armies out of thin air to fight the new threats to the motherland: Spain, France, and the United States.

At the same time, just as there are men who embody all the nation's virtues - like Benito Juárez in Mexico or Abraham Lincoln in the United States - the Mexicans have, according to their official history, a villain by decree, guilty of all the evils except maybe the earthquakes. The most serious accusation is that Santa Anna let go half of Mexico's territory to the United States. "Me? Selling half of Mexico?" says the General in Enrique Serna's brilliant novel, The Mother Country's Seducer. "For Christ's sake! When will these childish Mexicans learn that if this ship sank, it was not the helmsman's fault only, but the laziness and ineptitude of the oarsmen? Like all human beings, I have committed mistakes, and some had dire consequences. But from there to the monstrosity they want to blame me for, there is an abyss."

The general was not a man of much learning, but he knew how to use the sentiment of the time, which is merely a way of saying that he was a skillful adventurer. He had the air for the office and loved all forms of display. More often than not he fell in disgrace, suffered the ingratitude of his people, and only by sheer luck was saved several times from being shot. His fortune always was, as so eloquently put in the 13th century poem Carmina Burana, changeable like the moon.

Santa Anna deserves a more objective judgment than that of official history. For his sins, he certainly paid, in part by living long past his time. It certainly would have been better for his reputation if he had gone sooner. But either way, his life story is more interesting than all but a select few, and it includes a little bit of everything, including glory, tragedy, intrigue, love, exile, and oblivion. Santa Anna: The Life and Legacy of the Legendary Mexican President and General looks at one of Mexico's most important figures.