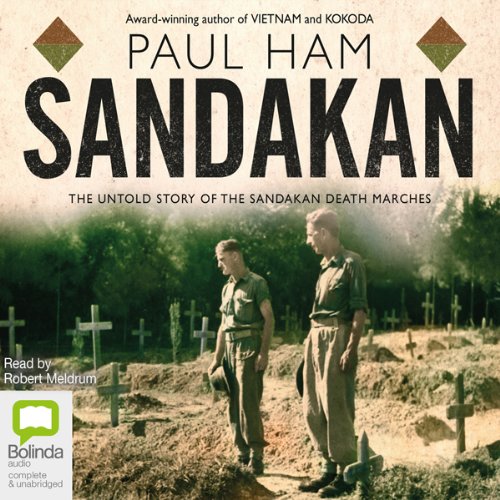 By: Paul Ham
Narrated by: Robert Meldrum
Try for $0.00

This is the story of the three-year ordeal of the Sandakan prisoners of war - a barely known episode of unimaginable horror. After the fall of Singapore in February 1942, the Japanese conquerors transferred 2700 British and Australian prisoners to a jungle camp some eight miles inland of Sandakan, on the east coast of North Borneo. For decades after the Second World War, the Australian and British governments would refuse to divulge the truth of what happened here, for fear of traumatising the families of the victims and enraging the people. The prisoners were broken, beaten, worked to death, thrown into bamboo cages on the slightest pretext, starved, and subjected to tortures so hideous that none survived the onslaught with their minds intact, and only an incredibly resilient few managed to withstand the pain without yielding to the hated Kempei-tai, the Japanese military police. But this was only the beginning of the nightmare.

In late 1944, Allied aircraft were attacking the coastal towns of Sandakan and Jesselton. To escape the bombardment, the Japanese resolved to abandon the Sandakan prison camp and move 250 miles inland to Ranau, taking the prisoners with them as slave labour, carriers and draught horses. Their journey became known as the Sandakan Death Marches. Of the 2700 prisoners originally sent to Sandakan, only six - all of them Australians - would survive.

This important and harrowing book narrates the full story of Sandakan, as told through the experiences of the participants. Paul Ham has interviewed the families of survivors and the deceased, in Australia, Britain, and Borneo, and consulted thousands of court documents in an effort to piece together exactly what happened to the people who suffered and died in British North Borneo, and to determine who was responsible.

What listeners say about Sandakan

A sad story about the spirit of Australians

What made the experience of listening to Sandakan the most enjoyable?

What made this story "enjoyable" was learning about the sacrifice the Australians endured for their country and the allied, pacific war effort.

What was one of the most memorable moments of Sandakan?

Yes. Very moving. I had to control my anger about a people long gone and not shift it to their descendants.

Paul Ham is a very knowledgable author and his stories are engrossing and necessary. I have read the majority of his books and each one makes me appreciate the "digger" more and more. I served with the Aussies in Afghanistan. Truly remarkable soldiers!

With few survivors (6) out of 2,500 odd, Japans ignoring it and both British/Australian government secrecy this story is amazing it ever got to print. Paul Ham has done his job so well I have to put him in the same league as Cornelius Ryan and John Keegan, possibly Richard Holmes as well. Wish I could write as well as Paul Ham let alone research to his depths.
This story isn't going to be as shocking as any other prisoner war story except that possibly everybody dies. The German 6th Army taken at Stalingrad also had great loss. Whether your view is that they deserved it or not, I don't think this story is a clash of cultures but just people being inhuman to others. No reason, bushito be damn, as a human, you don't do this. Animals don't even do this and we are suppose to be better than that.
Robert Meldrum reads this book well. A good book that made me despondent, mad-as-hell and then forgiving, all within the 18+ hours of listening. If I have learned anything it is don't surrender, don't listen to the bull-shit and when you have the chance, escape.

The japanese's shamefull past!

Great story! being an aussie, this book really hit home with only 6 survivers left, out of over 2400 australian & brittish troops.... a death rate of 99.8%!!! their accounts of the japanese barbaric & brutal torture of them, truly saddened me to tears. Every one should learn about what the japanese did to their P.O.W's in world war 2, such a disgrace. my only gripe about this book is that there were too many personal opinions from the author for my liking!

Would you consider the audio edition of Sandakan to be better than the print version?

This is an extremely moving book that describes the horrors experienced by Allied Servicemen captured by the Japanese. It is easy to understand why so many Australian ex-servicemen could never make peace with those who tortured and killed so many.

This is a twin to the Bataan Death March, only it's Australia's version of it. I almost think it was worse than Bataan, I could not believe the extent of the losses the Australians experienced. It is a must read for any one. A truly great book.

Sandakan is a heart wrenching enlightening and wonderfully researched capturing me from the start. Robert Meldrum is perfect in his Narration of this book, precise articulate expressive. This is a great audiobook even if you are not a follower of war stories/research Enjoy
I did

If history has taught us anything, it is that the past should never be forgotten. To his credit, Paul Ham has brought the story of the Sandakan POW camp and death marches back into the public eye. I personally did not know such a travesty occurred to our Australian and British diggers and I found it very informative.

Many people may be vaguely aware of the horrific conditions and cruelty suffered by prisoners at the hands of Japanese forces during WWII, but even I wasn't aware of just how far the depravity went until I heard this story. Over 2200 prisoners passed through the Sandakan POW camp. 1500 were killed on the forced death march near the end of the war, many murdered for being too weak from sickness and exhaustion to continue on. The rest died in and around the camp from disease, torture and from being forcibly worked to death. Of the 1500 marched to death, only 6 survived. Combined with the losses suffered at the camp, it was a death rate of 99.8%.

The story is told in all of its shocking detail in Ham's book. Eyewitness accounts from surviving prisoners, guards and natives make for a disturbing telling. I was moved to tears a number of times during the book. It is so important that these events are never forgotten. For as George Santayana said: those who cannot remember the past are doomed to repeat it.

Cruelty knows no bounds. When my boys get older, this will be a required history book for them to read.

There is a reason The British and Australian army did not want this story to get out after the war. This story is not only incredible sad, (they were not worth trying to save,) it I full of strength and dignity to stand your duty, to help others when there is no future,to continue to represent good against the devil incarnate who had no limit to the sadistic evil they would unleash against their perceived enemies. Torture, canibalism, sadistic

What did you love best about Sandakan?

It was an horrific but important account of the suffering of POWs under Japanese authority.

What other book might you compare Sandakan to and why?

It was a pity the reader mispronounced quite a few of the Japanese names but otherwise a decent job.

Very well written and narrated. A story of the bravery and strength of Australian & British POW’s in Borneo during WW2. My Great Uncle died at Sandakan. I have always wondered what happened to him. This audio book has brought me closer to his memory.

A tragic story in so many ways, beautifully told.

The Sandakan tragedy was buried and unknown for so long because it was too horrible, which was appalling neglect of the victims and their families. Wonderful work by Paul Ham bringing this story to life. Beautifully narrated.