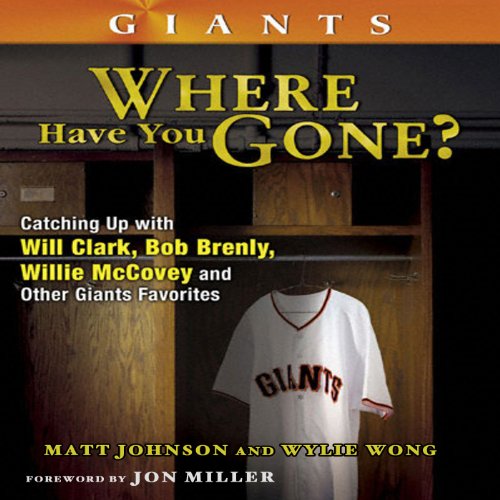 By: Matt Johanson,Wylie Wong
Narrated by: Scott Peterson
Try for $0.00

An old gangster becomes a gangbuster. A pitcher inspires his two daughters to become professional athletes. Two best friends split apart, only to separately land behind bars. In Giants: Where Have You Gone? authors Wylie Wong and Matt Johanson reconnect listeners to San Francisco players of the past, especially those whose lives took dramatic turns. Included in the book are stories about Willie McCovey's struggles to heal his ruined knees, Orlando Cepeda finding peace through Buddhism after a drug conviction and prison term, and Will Clark, after learning that his son was autistic, going to bat for other children with the brain disorder. The drama of many Giants players' careers can be relived, with commentary from team legends like Felipe Alou, Dusty Baker, Lon Simmons, and Hank Greenwald.

San Francisco Giants: Where Have You Gone? also offers the chance for fans to reacquaint themselves through up-close and personal portraits of the players' current lives. Jack "The Ripper" Clark did the unthinkable by joining the Los Angeles Dodgers as a coach; fired by the team after a near-fatal motorcycle accident, he returns to Dodger-hating form. Bob Brenly discovers that even a World Series-winning manager can lose his job over a bad team. Greg "Moon Man" Minton renovates swimming pools and hunts elk with a bow. Joel Youngblood experiences the boom and bust of the dot-com economy, while Chris Brown avoids gunfire as a Halliburton truck driver in Iraq. Finally, listeners will touch base with coaches Mark Davis and Chris Speier for a glimpse into clubhouses in both leagues and a snapshot of the game in the early 21st century.

Where does San Francisco Giants rank among all the audiobooks you’ve listened to so far?

Stories on individual players vary, of course. Favorites included Dravecky, McCormick, Perry, and Speier. Some stories well known, inspirational. Some are catching up with old friends from youth.

Learn to accurately pronounce names! Hearing Brian Sabean's surname as "Sa-beeen" vs "Say-be-an" was distracting and annoying. There were other errors as well, but this one was the most frequent and grating. It detracted from the book as a whole.

No. Its format is ideal for periodic or sporadic listening. Nice if your time is limited. I like to have this kind of short story style book in my library for that reason.