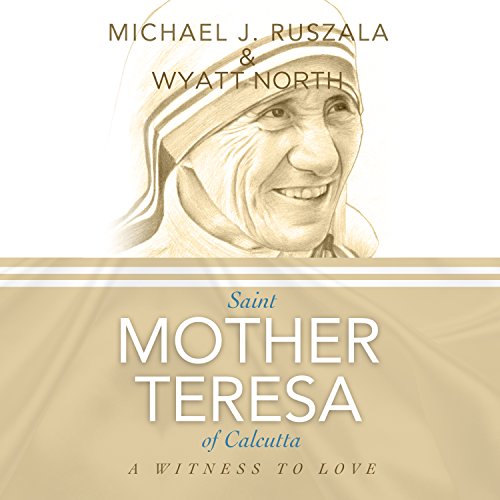 Saint Mother Teresa of Calcutta: A Witness to Love

While the 20th century was often a time of turbulence, selfishness, godlessness, and violence, Mother Teresa of Calcutta was a witness to love. She was a clear reminder of the goodness within human nature and the beauty of being truly open to God.

"Mother" was her religious title, but as she ascended to the world stage, it became her role for the world - to be like a mother to all, no matter their origins. She was accepting and welcoming towards all people, not only towards the good or the like-minded. She continues to serve as an inspiration to people of all walks of life and all creeds. Where the world was blind to poverty and misery, Mother Teresa led the path to love.

What listeners say about Saint Mother Teresa of Calcutta: A Witness to Love

The book is good. The Narrator was awful. Such a hard book to listen to, because if the narrator. I'm enjoying listening to many other books. I've tried listening to this book for two years now and the narrator is really bad. I'll to back to reading these myself. Thank you!

Spikes of sound bursts interrupt, and if listening via headphones would cause a great deal displeasures.

Not what I would call well written or well read

Story doesn't flow very well and the reader doesn't help.
It probably shouldn't bother me as much as it does, but it was stated that world war 2 was from 1914-1918. An obvious error.

This book was very interesting and told the story of Mother Teresa in very easy to understand language.

The narrator stumbled over normal words and read like it was his first time seeing the material. I would have had difficulty pronouncing some of the names ; but, I think with some practice they would become easier.