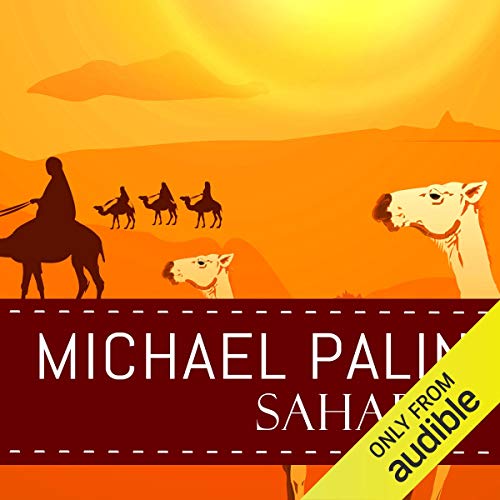 Michael Palin is off again, this time to the seemingly desolate Sahara Desert. There's no easy way across, as he and his team discover on their most challenging expedition yet.

From a starting point in Gibralter, Michael makes his way to Morocco, then over the Atlas Mountains to the little-known countries of Mauritania, Mali, and Chad. He travels on the longest train in the world, meets with the Paris-Dakar Rally in the middle of nowhere, and sees the world's largest mud mosque before arriving in Timbuktu.

Then it's a journey with nomadic herders and a camel caravan, to Algeria and a recently re-opened Libya. Finally, Michael returns to the classical remains of Tunisia, where Life of Brian was filmed and he was crucified.

The mysterious, barren desert is revealed to be a place full of people, landscapes, and stories, a vibrant land with a history of civilisation, trade, and conquest stretching from the ancient Egyptians to the oil-rich Islamic republics of today.

"Engaging, detailed insight to the Sahara." (Publishers Weekly)
"With considerable charm, humor, descriptive power, and informative sidebars, Palin provides a lively picture of the people and places he encounters." (AudioFile)

What listeners say about Sahara

I've known that Palin was doing these "travelogues" for some time now. But I've never gotten around to watching his shows or reading/listening to any of his books. I never really could stand the travel channel, any way.

One day I was poking around Audible, and there it was - "Sahara". I downloaded right away. I wasn't quite sure what I expected but with the name Sahara, it had to be intresting. What I found was delightful real-life story that had me hooks for hours. I finished the whole thing in one sitting. Palin is an excellent story teller and I can't wait to listen to his other adventures.

Where does Sahara rank among all the audiobooks you???ve listened to so far?

This is one of my favorite audiobooks. I listened to it on my 2 mile walk home from the train station every night for a few weeks, and it was a great companion for that stroll.

Palin has a gift for bringing new worlds alive, introducing you to the people he meets along the way and explaining how the travels are going. In this trip they go through Egypt, via ferry deep in Africa, then through the desert. All along the way he brings alive the towns and peoples who they meet in a way that is never tedious or boring.


What was your reaction to the ending? (No spoilers please!)

Made me go download another Palin travelogue right away!

What does Michael Palin bring to the story that you wouldn???t experience if you just read the book?

His narration is top notch. I am not sure that this would have been a third as engrossing if I'd just read the book.

Combines humour and an infectious sense of adventure really well. He's as interested in the human side of his travel as much as the buildings and countryside and it's the characters in the book that make it as absorbing and inspiring. Highly recommended.

Michael Palin is well-known for his talented acting and as a talented comedian as one of the Monty Python gang. Well, he has another talent - as the author of his "travel" series with the BBC! The book is delightfully written, eloquent, and brings to life as though you were there! A talented man and a delightful "read"!

This is the only audiobook which I couldn't finish. I got about three hours in. There wasn't much excitement, and I didn't learn much about the cultures. I didn't know that the traveling was done in modern days...the audiobook I listened to prior to this was "Endurance," which was a lot more exciting. Sahara seemed to be more of a documentary than an adventure.

Palin going through the motions

If you enjoy Palin and you need some light bedside noise this is fine. Not claiming to be anything more than a diary travelogue the book delivers mild humour and a slow trot through the journey. Touching on colonial histories and trying to describe the cultural diversity Palin has obviously researched this title well.

There are better Palin books out there ( Hemingway ) and Himalaya is a better journey book by Palin. If you have a 4 hour plane ride ahead of you then you could do worse than download this book.

Not a romantic as hoped

Michael Palin is an exceptional travel writer.But Sahara didn't offer the Laurence of Arabian-esque romance of dunes and oasis.

His Saharan journey was far to urban and not enough remoteness. But maybe I've got Sahara wrong.

Such brilliant descriptions - it’s like being on the journey too. And humour of course. Thanks Michael

As always Michael Palin entertains. My boring flight sped by when I was listening to this. Brilliantly written and narrated. I can't recommend Michael Palin's books highly enough.

Like the journey through the Saraha he describes, this audiobook is occasionally funny and rarely interesting. Most of it is more like a dull camel ride, an old Michel Palin complaining quite a lot about the aches he experienced during his trip.

Alhough I'm generally charmed by Palin and rarely disappointed by the audible titles I have bought, this is not one to recommend.

A shame it is abridged

Very interesting, as always from Michael Palin, and easy to follow. Vivid descriptions of Africa seen in a way, and over a time period, few Europeans will ever see.