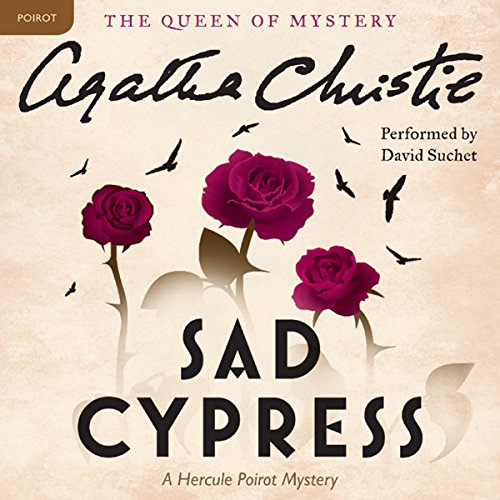 By: Agatha Christie
Narrated by: David Suchet
Try for $0.00

Beautiful young Elinor Carlisle stood serenely in the dock, accused of the murder of Mary Gerrard, her rival in love. The evidence was damning: only Elinor had the motive, the opportunity, and the means to administer the fatal poison.

Yet, inside the hostile courtroom, only one man still presumed Elinor was innocent until proven guilty: Hercule Poirot was all that stood between Elinor and the gallows.

What listeners say about Sad Cypress

Not My Favorite Christie

Who would you have cast as narrator instead of David Suchet?

Hugh Fraser, who narrates many other Poirot novels, would have been preferable. Suchet occasionally spoke so softly that I couldn't hear the narration, or he was so caught up in performing the speaking voice of a dying woman that I could not discern what he was saying. Absolutely inject a degree of acting into your narration, but when the performance gets in the way of actually understanding what you are saying, it should be done away with.

Poirot did not show up in this novel until approximately two hours in! I would have preferred a shorter introduction to the mystery, and then let him discover some of those additional details in his investigation.

I was terribly disappointed that this well-read Agatha Christie novel was blemished by poor audio quality. The wonderful David Suchet, who played Hercule Poirot on the tv series narrated it wonderfully, only the sound quality was poor. (It was recorded over 20 years ago, so that could be part of the reason, though I've listened to radio programs from the 40's and 50's that sound great--so I don't know what happens).

I think this is one of Agatha's better books--where only the genius of Hercule can save Elinor from being charged with the murder of Mary Gerard. By now it is a classic I suppose, so I don't have to describe the mystery, but I had hoped to enjoy the performance as much as the story itself, which I already knew. I would never happily give anything read by the marvelous David Suchet only 2 stars, unless there was a serious problem with the quality of the recording. His narration is fine--just difficult to hear. His voice has just come to be associated with Christie's books, (much like Hugh Fraser's). So I'd say it's definitely worth a listen, but be prepared to strain to hear it all clearly.

If you could sum up Sad Cypress in three words, what would they be?

What was one of the most memorable moments of Sad Cypress?

When Piriot came forward with a rather complicated explanation of how the murder was committed.

Have you listened to any of David Suchet’s other performances before? How does this one compare?

It's a book that moves rather slowly, I definitely would not say I was on the edge of my seat at all times--but the plot unfurles like a flower blossom opening until it is fully in bloom.

I enjoyed this book a great deal, but I don't think it's one of the best Piroit Mysteries. It is unusual in that it has rather long court scenes, which is different in a Christie mystery. The ending was rather complicated and I actually had to listen to it twice to fully understand the relationships of the people involved and why the crime was commited. The herione falls to pieces in the end, she was not particularly sympathetic or empowered, she kind of let events overtake her in the name of unrequited love. By contrast the young woman in Christie's Sparkling Cyanide seemed to have it more together and the ending of that story easier to grasp. Die hard Christie fans won't want to miss this book, but if the listener is only an occasional Christie listener there are other books she wrote that are much better.

Loved it! Lots of suspects which I really enjoy. David Suchet is brilliant as always!

If you're a fan of Hugh Fraser, it takes some time to get used to David Suchet's reading. He's a fine performer, but the audio qualtiy/mastering is poor. The sound levels swing wildly and at the loud end there is distortion and at the quiet end occasionally Suchet whispers his lines and they're very difficult to understand especially if you're listening in the car.

Audio mastering is poor and you will likely have to turn the volume up and down at different places and rewind.

One of my favorite A. Christie stories

If you could sum up Sad Cypress in three words, what would they be?

No. I am sorry, I loved Poirot, but overall the narration did not match my idea about the story. This is one of my favorite Agatha Christie books and I like to re-read it every few years or so, so I have very definite ideas about the mood of the book. I've always thought that the overall mood is monotone, detached and melancholy and I think that the performer over-acted in many instances.

Although not my favorite Poirot novel, I still really enjoy this story: the method of murder is clever, and the there's a lot going on, but not too much. However, and I hate to say it, but the TV adaptation is better (please don't shoot me). David Suchet as the narrator is of course fantastic as we can hear the real Poirot again. Additionally, Mr. Suchet does a great job with voices, including women's voices, which must be difficult for a man with a fairly deep voice. Bravo!

I love Poirot stories and this one was no exception. David Suchet is an amazing performer and does great performances of every character, not just Poirot. I'm not looking forward to the day I run out of Poirot novels narrated by him.

Agatha Christie never disappoints & David Suchet’s reading of Sad Cypress is the only way to hear it! David Suchet is Hercule Poirot & his distinctly different voices for each character, including the narration in his own voice, make the book come to life & easy to follow. The beautiful, unique subtleties between the female characters & each of the male ones showcase Mr. Suchet’s talent. This is a beautifully written book that I highly recommend & will definitely be listening to more than once.

I liked everything about it but the narrator's voice becomes so low and mumbling when reading one key character that I had to keep changing the volume to listen...I could not leave it on the louder setting because it became too loud for comfort the rest of the time.