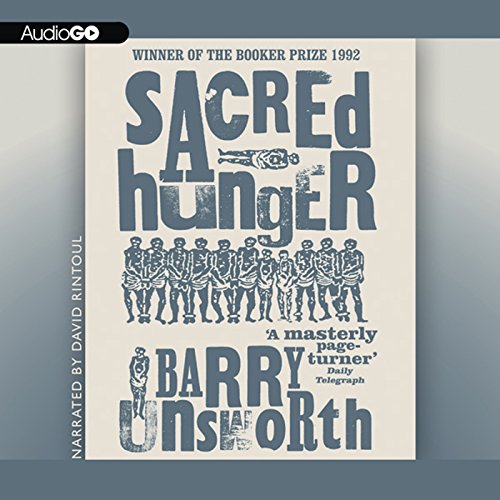 By: Barry Unsworth
Narrated by: David Rintoul
Try for $0.00

Sacred Hunger is a stunning and engrossing exploration of power, domination, and greed. Filled with the "sacred hunger" to expand its empire and its profits, England entered fully into the slave trade and spread the trade throughout its colonies.

In this Booker Prize-winning work, Barry Unsworth follows the failing fortunes of William Kemp, a merchant pinning his last chance to a slave ship; his son, who needs a fortune because he is in love with an upper-class woman; and his nephew, who sails on the ship as its doctor because he has lost all he has loved. The voyage meets its demise when disease spreads among the slaves and the captain's drastic response provokes a mutiny. Joining together, the sailors and the slaves set up a secret, utopian society in the wilderness of Florida, only to await the vengeance of the single-minded young Kemp.

What listeners say about Sacred Hunger

This is, quite simply,a modern masterpiece. It is everything that great literature should be - eloquent, profound, entertaining, and accessible. The topic of slavery is terribly difficult to read about, but so important to acknowledge and be well informed upon. Unsworth's amazing novel approaches the subject from a unique perspective that is both emotionally affecting and intellectually stimulating without sacrificing good old story telling.
David Rintoul's performance is nothing short of brilliant. His many accents, his understanding of the text, and his perfect pacing all added greatly to the overall experience. This one is definitely worth a credit.

What made the experience of listening to Sacred Hunger the most enjoyable?

I can't remember the last time a novel impressed me so much. Any modern individual looking at the history of the Atlantic slave trade has to marvel that such a horror took place. What, we ask ourselves today, possessed European slavers to abduct, torment, and then finally sell perfect strangers who had done them no wrong? You can read the histories, some dry and some vivid. But if you want to hear how the slavers justified themselves in their own voices, this is the book for you. Thru fiction, Unsworth relates what the impoverished UK underclass saw in slavery, what the profiteers saw, what a man of the Enlightenment might have seen. In telling this tale of the Atlantic slave trade, Unsworth ignores all temptations to cheap and empty moralizing. Humans aren't born with much of a moral sense, Unsworth seems to be saying, but change does happen and in that we can take some comfort.

Fortunately, the author's powers of prose and story-telling are matched by the talents of the narrator, David Rintoul. Not only does he nail the many regional accents of Britain (and Ireland), he nails them even when he has those characters speaking pidgin! And Rintoul is an utter master of tone and inflection to distinguish characters who would otherwise sound too much alike.

A great adventure of hope and moral

This is a well written, compelling, and entertaining historic novel. It has some memorable characters and an important underlying moral. The Audible performance is excellent by David Rintuol. I have heard him narrate other books and he has performed them in the same professional and dramatic way that makes the work come to life, contributing to an enhanced appreciation of the work. Nothing about this novel or this performance disappointed me.

This is a terrific novel. It won the Booker – sharing it with the remarkable The English Patient – so it’s not as if I’m discovering it, but I hadn’t heard of it or Unsworth, so it feels a bit like a discovery after all.

There are two major parts to the novel – which is a minor [SPOILER:] – in its own right.

In the first, we get a split perspective. Erasmus Kemp is the son of a wealthy merchant who’s bet most of his capital on the new and burgeoning slave trade. His father builds and outfits a ship, The Liverpool Merchant, for that very purpose, and then sends it on its way.

At home, Erasmus spends his days trying to impress a young woman by taking part in a local production of a version of The Tempest. Unsworth is talented at showing him to be self-centered and entitled, and he paints Sarah as lively and proto-feminist. It’s a rich drawing room scenario with all sorts of Jane Austen-like details signaling the rise and fall of their courtship.

At the same time, of course, we know that the possibility of this marriage depends upon The Liverpool Merchant successfully obtaining a cargo full of slaves. Underneath the carefully drawn novel of manners – and presented in generally alternating chapters – is a horror that we come to see more fully over time.

Erasmus’s slightly older cousin, Matthew Paris, is part of the crew. A once idealistic physician who embraced a proto-Darwinism (there’s even a quick scene where, demoralized, he gives his materials to a young Darwin), he’s been virtually ruined. Imprisoned for impiety, he’s lost his practice and seen his wife die. So, with little more to lose, he asks his uncle to send him on the Africa trip.

It’s though Paris’s eyes, then, that we see most of the horrors of slavery. And, remarkably, Unsworth draws both sets of scenes with real skill. There’s a consistent feel to the narrative, but the tone obviously changes from scene to scene. While Erasmus is worried about how well he is delivering his lines, Paris is trying to figure out how to treat backs that have been torn open with a cat-o’-nine-tails and, eventually, fevers and dysentery that threaten the entire trip. While Erasmus worries over the subtle feelings of Sarah, Paris has to confront a Captain Thurso who increasingly channels a Captain Ahab like mania.

The back and forth adds to the power of each, subtly critiquing the way “gentility” depends on violence against others.

If that were all there was to the novel, I’d still have admired it. But, [MAJOR SPOILER ALERT:] there’s a second half that further complicates and complements the experience.

[PLEASE DON’T READ ON FOR THESE SPOILERS:] Eventually, Thurso pushes the crew too hard, and there’s a mutiny (or perhaps an accidental conflict that leads to mutiny). Paris and the others manage to get the survivors of the crew and cargo to a remote part of the Florida coast where they establish a utopian community where the would-be slaves live on equal terms with the sometimes shanghaied British sailors.

In the wake of the ship’s failure, Erasmus’s father has become a bankrupt and killed himself, ending Erasmus’s chance to marry Sarah. Some 15 years later, having married for money and become a major merchant in his own right, Erasmus sets out to find the renegade colony and bring them to “justice.”

There are some thrilling moments in the clash, but the larger matter – as is true of most novels I consider great – is the implicit conversation between conflicting world views. Each man feels in the right, feels as if he has witnessed great wrong, and it makes for a powerful coming together.

The very end shows us a glimpse of the future that Paris imagined, but – to be fair – we get an earlier glimpse in the opening pages when we meet Paris’s mixed-race son, a New Orleans character who can quote Alexander Pope and yet who knows the African-American experience first-hand.

As mixed as all that is, Unsworth never loses control of what he’s doing. I’m not prepared to say it’s better than The English Patient – that book is more ambitious artistically, and it achieves a yearning that few others accomplish – but, in turn, this one takes on perhaps a larger subject and certainly brings convincingly to life a broader range of characters.

I see that Unsworth, who died in 2012, has a long list of other books. I’m looking forward to exploring more of them.

What was one of the most memorable moments of Sacred Hunger?

Have you listened to any of David Rintoul’s other performances before? How does this one compare?

the ending was a bit abrupt but a good story

I wigh the end hadn't been so rushed. other parts of the book dragged. why not draw the kast hour or two out a bit more?

This was a gem of a book. In it lies incredible historical writing that illustrates a darker period of British commerce. The story captures your heart with a collection of incredible characters spread over a decade with intrigue, sadness, and humor. The triangular trade of the 18th century is amplified by the author to reflect the greed of many on the backs of West African slaves, and the incessant hunger for profit deemed the “Sacred Hunger”.

The story revolves on the voyage of the “Liverpool Merchant”, its crew and the disease ridden onboard slaves. The main characters include the ship doctor Matthew Paris, a likable polymath of sorts, and the profit driven Captain Thurso, an evil opposite of Paris. Into this mire the author introduces the cousin Erasmus Kemp, a forlorn and vengeful character driven to undo a wrong. The description of the sufferings of the slaves are harrowing as is their murders. Yet the creation of the utopian community in Florida’s backwaters, all but brief, hints at a glimpse of humanity in an otherwise very dark age.

The narration of this book is simply fantastic. A very worthy Booker winner in 1992, sharing the price with the “The English Patient”.

This magnificent novel seems initially about the arrogance in which the slave trade was built. It is that, and much more. Each of many characters is deeply developed, though the slaves remain nameless abstractions. Each scene finely wrought. Descriptions are exquisite. The story of preparing the slave ship, buying slaves and sailing the Middle Passage to America becomes — through brilliant plot construction — scaffolding for a more complex and profound meditation on human nature and motivation, in contexts of captivity, class-bound capitalism and free community. Philosophical and psychological perspectives are threaded throughout, propelled forward by the characters and twists of plot. Among the finest books I’ve ever read. The narrator is superb. I listened at 75% speed.

The two characters that kept me going was Billy Blair and Michael Sullivan. the story would peak my interest then flounder. the ending was unsatisfactory.

Vividly recounted, beautifully developed characters that bring this history to life. The man can write; a modern Dickens.