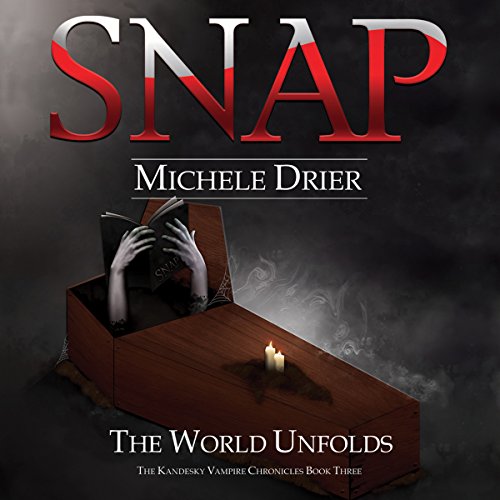 SNAP, a multinational celeb TV show and magazine, is the Holy Grail for Maxie Gwenoch. When she snags the job as managing editor, she's looking for fame, fortune, and Jimmy Choos. What she finds is a media empire owned by Baron Kandesky and his family. A family of vampires. They're European, urbane, wealthy, and mesmerizing. And when she meets Jean-Louis, vampire and co-worker, she's a goner.

The Kandesky vampire family rose in Hungary centuries ago. They gave up violence and killing to make a killing on the world's commodities markets and with that beginning they built SNAP, an international celebrity multimedia empire. Now cultured...and having found food substitutes for killing...they've cornered the world market for celebrity and gossip journalism.

They haven't fully left the past behind. Their Hungarian neighbors and rival vampire clan, the Huszars are starting to ramp up attacks, maybe looking to start a war to take over all the Kandeskys have built.

Snap: the World Unfolds is a peek into the media world world of celebrities sightings, jet setting and luxury, except this company holds its meetings after dark and bulls blood is the cocktail of choice. Maxie is Snap's latest hire and she's got a lot of catching up to do to understand her new employers, and sexy, glimmering Jean Louis who just may have a thing for her. That is, if Maxie can embrace his culture--with grace. It's hard, especially because she's the target of a nefarious plot to destroy the Kandesky clan and steal their assets.

I loved the look into celebrity media. The story barrels along with one surprise after another, and following Maxie's induction into an everlasting life of glamour, refinement and high fashion journalism is delightful. She's not one to go quietly--even with a beautiful lover waiting for her. This was a fun read!

I don't think this is book one in the series which really hurts the story. I was so confused. I stop listening halfway thru b/c I couldn't follow along.