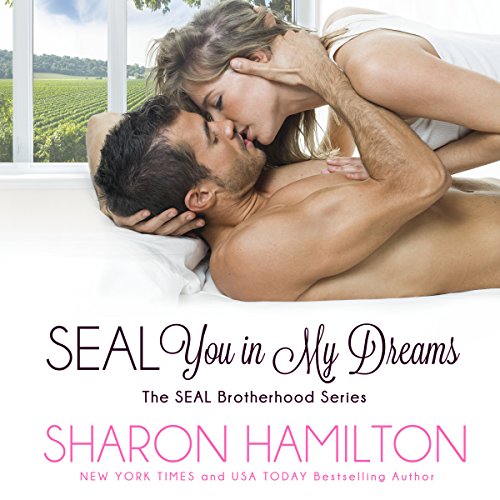 SEAL You in My Dreams

Special Operator Peter Watson's next great adventure begins at the Atlanta Aquarium when he encounters a mermaid who steals his heart. But playing with sharks and colorful fish in the Big Tank isn't nearly as dangerous, or as fun as what happens on land after their meeting behind glass.

Abbey Hart's summertime job in Atlanta was just going to be something brainless between her graduation from college and the start of her internship at a Sonoma County winery in the fall. But she's swimming upstream when her travels land her in the arms of a frogman, Navy SEAL Peter Watson.

Oceans apart, who could know that the wonderful week they shared together in Atlanta would turn from fantasy to reality?

What listeners say about SEAL You in My Dreams

SEAL, Peter Watson is a no-nonsense kind of guy. He lays all his cards on the table and asks you point blank if you’re going to fall in line… swoon. Toe the line is just what Abbey Hart does when she quickly loses her heart to this intense man.

It’s a novella, so you know things are going to move fast! It’s definitely a case of insta-love, but Sharon Hamilton knows how to make it work! There’s plenty of suspense, drama and steamy scenes packed into this audiobook which clocks in at just over 3 hours.

This audiobook was given to me at no cost in exchange for an unbiased review.

this book was so good and I found myself chuckling with this book. gotta to love TJ and his comments lol Peter sees Abby and all he thinks is she's a real life mermaid but can he save her from her ex fiance? Great story and can't wait for more from them.

Love the action. There is something compelling about the action that keeps you glued to your seat wondering what will happen next.

Short and sweet, mixed with some suspense and really hot scenes, made for a few enjoyable hours especially being told by one of my fave voices, Mr. Hart.
Not really sold on how fast the relationship between Peter and Abbey has progressed, but I like to keep an open mind to the possibility.

Sexy, hot, and too short only because I loved these characters... As usual JD Hart never fails to deliver a fantastic performance!

I am never disappointed in these Seal books by Sharon Hamilton! This one was no exception, it's a quick novella featuring 3 of the SEAL's from Team 3 and takes place in Atlanta. There is plenty of hot, sexy fun and a little bit of danger involved but nothing these tough Navy men can't handle. It's always a good time when these guys are involved and they finally meet their true love. This time up Alex finds himself enthralled by a 'Mermaid" at the Atlanta aquarium. Crack this book open and follow our heroes in this quick read, I guarantee you'll be hooked! Can't wait to see who's next up and find out what else is in store for this couple. As always JD Hart does a fine job give these characters their voices (I might be a little in love with this narrator ;)

Swimming for a SEAL

Would you consider the audio edition of SEAL You in My Dreams to be better than the print version?

No it just enhanced the story with JD Hart amazing narration. The hero and heroine were an engaging couple.

What was one of the most memorable moments of SEAL You in My Dreams?

When the SEALs smack talk.

There were several scenes I really enjoyed. Don't what to give away any spoilers

There were several moments in this book that really moved me I urge readers to listen to this marvellous story, so they can enjoy the romance and story.

This was a very enjoyable listen JD Hart and Sharon Hamilton have an absolutely dedicated liaison which brings the very best for our enjoyment. Hopefully we will read more of Peter and Abbey

Falling for a mermaid

I enjoyed this novella about Peter and Abbey. She has 2 temporary summer jobs in Atlanta where Peter and his fellow SEALs are for a few weeks. Peter sees Abbey in the aquarium feeding the fish and he's enamored with her. He meets her later at her second job as a waitress in a bar. They have an instant attraction. She has some drama with an ex and the SEALs get to rescue her. Since this is a short story, there is promise of another book with Peter and Abbey and I can't wait for it. You will enjoy this book. I have been given a copy in exchange for my honest opinion.

Would you consider the audio edition of SEAL You in My Dreams to be better than the print version?

I always enjoy audio books over print books because listening to the story always makes me feel like I'm experiencing exactly the same things that the characters are experiencing. I find audiobooks comparable to a technicolor movie and paperbacks to a black and white movie. There's a huge difference in my mind.

I really enjoyed both the hero and the heroine having a love of the water in common since he's a SEAL and she's a mermaid at the Atlanta Aquarium. It's a brilliant way to bring two lonely hearts together!

What does J.D. Hart bring to the story that you wouldn’t experience if you just read the book?

J.D. Hart is one of the best narrators in the business in my opinion because when I listen to him I often forget that he's a one man show, portraying both the male and female characters and doing the narration part as well. He sure knows how to entertain with his voice!

My heart melted when Peter was frantic to find Abbey when she went misssing and also when they were reunited again. I really love the protective side of these Alpha SEALs because they always treat their women with courtesy and respect which is exactly the way a woman should be treated.

I love this series and I hope it never ends! Sharon Hamilton and J.D. Hart are perfect together as author and narrator.