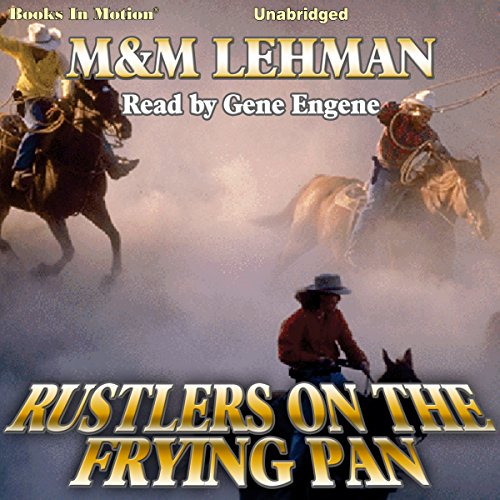 Rustlers on the Frying Pan

Rustlers on the Frying Pan

When Russ Lang, sheriff of Twin Buttes, is killed trying to avert a bank robbery, his son, Todd, seeks revenge. Todd goes undercover posing as a cowhand to get a job at the Frying Pan Ranch, which is suspected of being a haven for crooks of ill repute. The Frying Pan Ranch had belonged to a Claude Fanning, who just up and disappeared. Now the ranch is being run by a rough fellow named Shep. Todd soon realizes he may never get off the ranch alive until he discovers Link, another cowboy like himself who turns out to be a detective for the Montana Wool Growers.

This is a new author for me and I could not find any information about the author Lehman. I chose the book because the narrator is Gene Engene. I think his baritone voice and style of reading is perfect for the western genre.

Russ Lang, Sheriff of Twin Butte, Montana is killed in a bank robbery. His son, Todd Lang, comes to town seeking his father’s killers. He goes undercover on the Frying Pan Ranch and finds a “nest of rattlers” as outlaws are using the ranch as a hideout. Todd meets a girl and falls in love besides discovering a new friend Link, a detective for the Montana Wool Growers. They both are undercover at the ranch. The story has lots of information and description of horses, as Todd has been making his living breaking and training horses.

The book is fast paced just five hours that is packed with action. This is a classic type of western that makes for a great get away from it all story. The book is well written and easy to read.