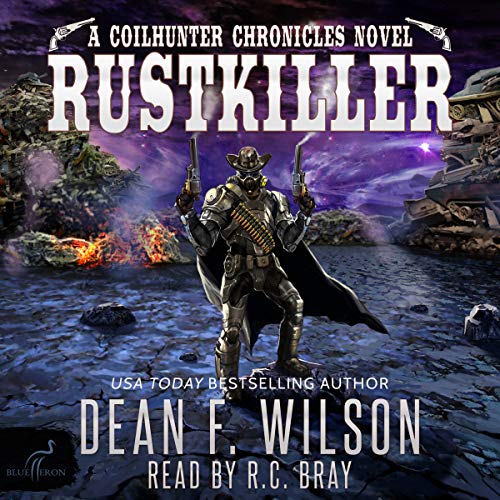 Welcome to the Rust Valley.

The Wild North is full of nasty places, but there are some places you just don't go. One of them is that scrapyard desert known as the Rust Valley. It's where vehicles go to die. That's why you don't go in after them.

The bounty hunter Nox made a promise to himself that he'd never be caught dead there. Yet when a couple of kids end up wandering inside that metal maze, he finds himself with no other choice.

He decks himself out in his finest armor. He'll need it. That land is where the rust-covered Clockwork Commune live, and if they don't scavenge the metal off you, they'll scavenge the flesh instead.

Nox is used to being called the Coilhunter, but this time he's saddling up with a new, more fitting title: the Rustkiller.

What listeners say about Rustkiller

Dean delivers another amazing story and R. C. Bray does an absolutely KILLER job with the narration!! Even my husband who is not a huge fiction fan loved listening to this series. Highly recommend!!!