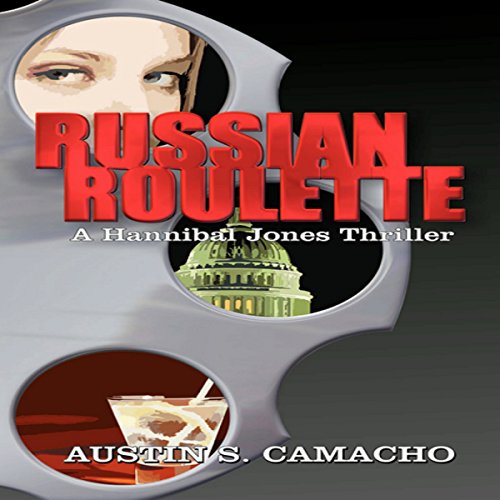 By: Austin S. Camacho
Narrated by: Jason Fella
Try for $0.00

Washington, DC's professional troubleshooter, Hannibal Jones, is enraged when he is forced to take a case at gunpoint. His client is a Russian assassin who will kill Hannibal's beloved, Cindy Santiago, if Hannibal refuses to help him. With no choice, Hannibal agrees to investigate the smooth, wealthy Algerian who has stolen the heart of the woman his new client loves.

At first the case looks simple, but Hannibal's view quickly changes when evidence surfaces connecting the Algerian to Russian mob money and the apparent suicide of the girl's father several years earlier. Further investigation reveals that the Algerian may not be who he says he is. Then more deaths follow, closing in on the Algerian and the girl. At first working only to protect Cindy's life, Hannibal is soon chasing the truth for its own sake and must fight his way through past lies, present jealousies, and the Red Mafiya to learn the real reason that death is stalking the couple.

Hannibal peels the Algerian's history like an onion, each layer revealing a false identity. His search for the truth leads to a dramatic shootout on Roosevelt Island, side by side with his murderous client.

What listeners say about Russian Roulette

The beginning of the story starts a little slow but once it gets out of low gear it jumps right into high gear and stays there until the end. There's plenty of action, shooting, killing and betrayal. Overall I enjoyed the story and you will too.

His business card reads: Hannibal Jones, Troubleshooter. He is former NYPD homicide, former FBI-Treasury, licensed PI, and was a US army brat raised in the Germany of his mother after his father's death in battle. The publisher's blurb is a pretty good hook, so no need for recap or spoilers. The characters have life from the writing and are well done. I love this series! The book I loved, the narration not so much.
"I was given this free review copy audiobook at my request and have voluntarily left this review."

International intrigue, love, greed, murder: all the ingredients for a great mystery!

Russian Roulette: Hannibal Jones Mystery Series. Great entertainment and a great listener experience.
Fast paced and gritty, quite a lot of build up and most of the action is in the latter third of the book . But the build up is necessary to the tale.
Highly recommend it.
I was given a free copy of this audiobook at my own request, and voluntarily leave this review.

Russian Roulette: A Hannibal Jones Mystery Series was a good read by Austin S. Camacho. Hannibal Jones is a professional troubleshooter in Washington, D.C. Hannibal is forced to take a job at gunpoint. The client is a Russian assassin who told Hannibal that he will kill his love if she won't help him. He is investigating an Algerian who is with the woman the assassin loves. While investigating Hannibal finds a link from the Algerian to the Russian mob. Many deaths seem to follow the Algerian and Hannibal must find out why. I enjoyed reading this book.

Trouble shooting for the Russian Mafia

Russian Roulette the second book of the Hannibal Jones series that I have listened to. Hannibal calls himself a troubleshooter. He is forced to help and become involved with a Russian Mafiya killer, Aleksandr Ivanovich who will kill Hannibal’s girlfriend Cindy if he doesn’t comply. Ivanovich is in love with Viktoriva Petrova who is engaged Dani Gana. Ivanovich does not believe Gana is who he claims and wants Hannibal to investigate. Blackmail plots, scandals, Russian mob money, and dead bodies litter Hannibal’s path. The story evolves with more and more characters, creating many twist and turns, making it difficult to guess the truth, making the end surprising. Once again I enjoyed both the storyline and the narration. I was given this free review copy audiobook at my request and have voluntarily left this review.

I listened to Russian Roulette on a long road trip. The narrator did an amazing job with the accents of all the various characters! It really held my attention.

a lot of action