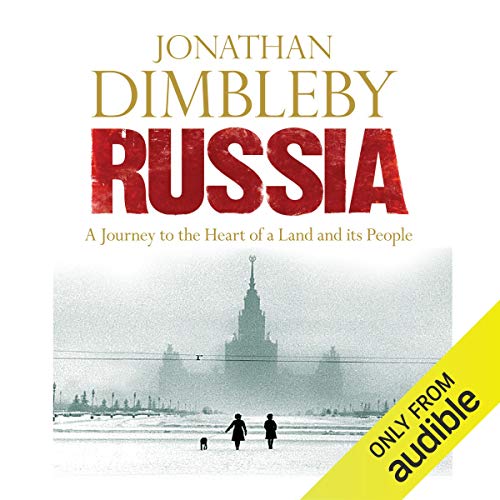 In this timely and revealing portrait, distinguished author and broadcaster Jonathan Dimbleby crosses eight time zones and covers 10,000 miles, from Murmansk in the Arctic Circle to the Asian city of Vladivostok, in an attempt to get beneath the skin of modern Russia.

Travelling by road, rail and boat, his epic journey takes him from the splendour of St Petersburg to remote parts of Siberia. Jonathan was the only British television journalist to interview President Gorbachev during the Cold War, and, returning to Russia for the first time since those days, he discovers a land transformed.

But despite economic progress, he finds aspects of Russian society deeply troubling, and takes an unflinchingly critical look at the way Russia has been run during the Putin years. For Jonathan, crossing the immense Russian landmass became as much an interior journey as an exterior one.

Filled with a dazzling array of historical and literary references, this is a riveting and illuminating account of modern Russia. (Please note: at the author's request some autobiographical material has been excluded from this recording.)

I'm only partway through the audiobook, but so far, not-so-good...
I like Jonathan Dimbleby on Radio 4, where he does a good job as debate moderator on Any Questions, but I'm less convinced by him as an author and narrator.

Just a couple of examples of clumsy writing - he mentions 'circumnavigating' an aggressive dog to reach its owner's house. He's unable to discuss the Vikings without the obligatory references to rape and pillage. An old woman's stove is 'festooned' with pots and pans... Better editing might have helped to remove some of Dimbleby's stylistic excesses.

He's obviously been told to bring some of his own personality and humanity to the proceedings, so we get some non-sequitur references to his boarding school days, his boating experiences in Devon and some hedged references to a possible history of depression. His own moods and emotional responses are jarring, and add little to the reader's appreciation of the places he's reporting from.

Whereas WG Sebald, Jan Morris or Paul Theroux are able to evoke a place through its emotional impact on them, JD doesn't quite manage to pull this off, and ends up coming across as a bit of a whiner when he affects to tell us that he finds St Petersburg cold and somehow hollow at its core.

Some of the dialog and interchanges with characters also fails to convince - early on he admits to having little to no Russian (which begs the question, could he not have made an effort to learn before embarking on such an undertaking?). At one point he's conversing with an archaeologist who is enthusing about the thrill of finding artefacts - I don't think this took place: archaeologists aren't treasure hunters, and the thrill comes from piecing together evidence of the past, not from isolated trinkets, themselves of limited explanatory value.

All that said, I will persevere with the book, because I'm interested in life in the 'new' Russia, and Dimbleby has a journalist's eye for the underlying context, which is necessary and valuable to prevent the book from becoming a more straightforward travelogue.

If you ever wanted to understand what's happening in today's Russia and why, this is the book for you. Framed within an authoritative historical context, Dimbleby explains why this huge and still powerful country is wracked with contradiction, hostility towards outsiders and a sense of unease about its modern place in the world.

Dimblebly shows that corruption is rife and debilitating and that democracy under Putin is little more than a cynical sham. Yet through his encounters with Russians of all types, Dimblebly also reveals the commonly held view that freedom without democracy is possible. And that strength and stability matter far more.

From the cold wastes of Siberia to the throb of an 'aggressive' Moscow, Dimblebly paints an expert picture of the realities of today's Russian empire. Compelling, engaging, fascinating and thoughtful, this book shows the real Russia of today and what the future may hold for a behemoth that affects us all.

brilliant insight in to the lives and history of the Russian people at times trying too much to push the democratic agenda but the people and places Jonathan spoke to were real characters.

This is an enchanting journal of David's journey across one of the most underestimated countries in the world. Every chapter brings excitement, intrigue, history, culture and David's own personality. If you want to know what the REAL Russia is like, this is a must read. This is probably the closest a Western journalist has got to discovering the elusive Russian soul.

It could be an ineresting story for someone who knows nothing about Russia, its politics and history otherwise it is trivial.