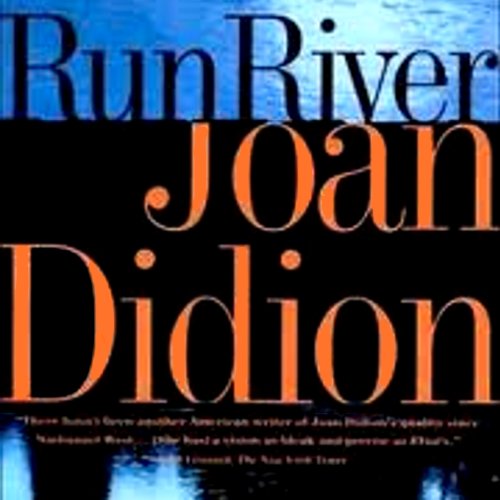 Joan Didion's electrifying first novel is a haunting portrait of a marriage whose wrong turns and betrayals are at once absolutely idiosyncratic and a razor-sharp commentary on the history of California. Everett McClellan and his wife, Lily, are the great-grandchildren of pioneers, and what happens to them is a tragic epilogue to the pioneer experience, a story of murder and betrayal that only Didion could tell with such nuance, sympathy, and suspense.

What listeners say about Run, River

This powerfully insightful first novel is Joan Didion's finest work. A finely-drawn meditation, it focuses on Lily, a shy and melancholy young matron who yearns for love, but struggles with the challenges of everyday life. Thoughtful but unemotional, Lily and Everett are quintessential Central Valley Californians, strong as the rich soil they till, but unable to confront their personal demons. Leading unexamined lives, they are filled with emotions they cannot express, forever reaching, like their gold-seeking forebears, for the real Eldorado that lies still further on, a mirage just beyond their grasp.

The narrator has a pleasant voice while reading descriptive passages of the book, but her character voices are a disaster. Depressed people are not best represented through high, squeaky, baby voices, like every female character in this audiobook had - Sarah, Martha, Edith, even Lily. The midwestern senator inexplicably had a southern accent. Male voices were unrealistic, exaggeratedly low, without nuance. Lily sings off-key, but the narrator merely recites the lyrics in a stiff monotone, failing the author's purpose of adding authentic layers to the setting and character they were so carefully chosen to reflect. However, while the disappointing narration distracts, it cannot diminish the compelling characters and strong storyline of this fine work.

I hated the narrator so much and the way the book was performed that I could not even concentrate on the story so I cannot really say how good the story was.

“All the days of their lives”

Would you consider the audio edition of Run, River to be better than the print version?

What was one of the most memorable moments of Run, River?

The scene when Lily McClellan reflects on her relationship with Everett - and, in the process, sounds like a character from William Faulkner.

Have you listened to any of Holly Cate’s other performances? How does this one compare?

No - I greatly enjoyed this performance, though.

Lily's comments (in chapter 23) that ends with the phrase "all the days of their lives".

This is not the California of later books by Joan Didion but a novel about Sacramento, and less Sacramento than the area down towards the delta of the Sacramento River, a flat land with a full but sluggish river, between levees, with a feeling of being out on the edge but marooned, rather than excited or exhilarated. And when the city appears it is less as the capital of the State than as a Valley town, provincial and almost gossipy. "Anybody who talks about California hedonism has never spent a Christmas in Sacramento", Didion has said – and I did, years ago, though the 100F+ summers are just as stultifying. I even spent a hot afternoon driving down the levee road to the rural Chinatown of Locke, which one drives into almost by accident by veering off to the land-side of the river. And barely is one on Locke’s Main Street, than one is out again and up on the levee road. In the “Run, River”, in 1959, a southbound highway fails to get built but it wouldn’t be long before Sacramento and most other cities were connected to each other through the interstate highway network. To this extent it is an end of an era (and a marriage) novel.

There is also strong dynastic quality to the story of the McClellans and, to some extent of the Knights, and, to this extent and also in the provincial setting and the ill-fated quality of their story, it is reminiscent of William Faulkner. It is also not surprising that there is a brief, but telling, exchange between characters about Chekhov’s “The Cherry Orchard”. The dynastic character of “Run, River” probably needs more words than in this shortish novel to encompass place and time historically or it needs a different storytelling technique, akin to Faulkner’s. There is something of this quality in the long flashback, going back to 1938 and that starts with a murder in 1959, but, with only a few exceptions (most memorably in chapter 23), the individual sentences lack that sense of the past being ever-present which is to be found in Faulkner’s most dynastic novel, “Absalom, Absalom!” However, in its own terms, “River, Run” is compelling and even moving, in a weary, distanced way, particularly in the only occasional ability of Lily and Everett McClellan to say what they truly feel for each other, and their situation, which they have felt “condemned to play … out together all the days of their lives.”

A delicate depiction of yearning, of reaching out for love but never quite grasping it. Lovely, brilliant writing but painful.