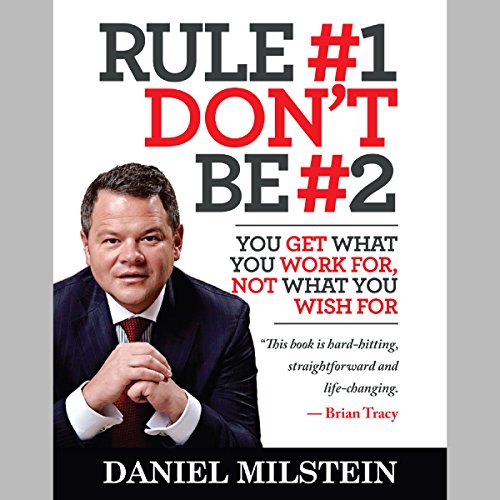 By: Daniel Milstein
Narrated by: Sean Tivenan
Try for $0.00

In his fourth book, Rule #1 Don't Be #2, Daniel Milstein inspires like never before, challenging us to dream big with his charismatic candor, giving us each a compelling glimpse into our own limitless potential. In addition to Dan's riveting accounts of overcoming adversity, Rule #1 Don't Be #2 captivates with countless stories of those who've dominated their respective fields against seemingly insurmountable obstacles. Framed in Dan's fast-paced, conversational style and his best-loved, thought-provoking quotes, we're gifted the life-changing lessons of the world's greatest achievers. Don't miss Dan's heartfelt tutorial that is destined to become a giant in the motivational genre and beyond.

What listeners say about Rule #1 Don't Be #2

This book is the real deal, full of encouragement

It was a real pleasure for me to read the mind of one of the successful entrepreneur wise and humble man. God has done amazing work in his life as well as his experience and now he shares it shortly and briefly in book i have learned alot and i want to go and impact the world for the Kingdom of God and be the one God originally had in mind for me to be ans do to the glory of His name. I enjoy wisdom of wise.

If you don’t sell yourself nobody else will!

This audiobook is a true gem, it is empowering, inspirational, ruthlessly honest, but most importantly it is probably the most outstandingly motivationalaudiobook you will ever listen to, if you REALLY want your dream to come true.

The author, Daniel Milstein, because he knows what he’s talking about. You see, in 1991, Daniel Milstein and his parents arrived in America, they were fleeing the religious and political persecution which raged in their native Soviet Union. Daniel Milstein at 16, had only 17 cents in his pocket, however even at that young age, he was richer than most, why, simply because he had a win/win mind-set, a positive outlook, guts and determination. With these assets, from that moment, although he himself didn’t realise it, he was already on his way to achieving the American Dream.

What I liked about this audiobook is that it is so full of inspiring stories. However, this doesn’t mean his message is sugar coated, certainly not! This is a man who tells it as it is, and freely admits that his philosophy runs along the lines of a swift kick in the pants.

Throughout he insists that success lies in attitude, and action, dreaming is no good, it is futile to wait for luck to come your way, the right time, approval from others. You MUST work hard, grab those chances, and not fear failure. Should things not go well, then use the experience as a learning curve, and take a lesson from Arianna Huffington’s mother, who told her daughter (Founder of The Huffington Post) ‘Failure is not the opposite of success; it’s a steppingstone to success.’

Complacency is another very important factor Daniel Milstein covers. It is essential that you remember you can never rest on your laurels. “Success is never owned. It is rented and the rent is due every day!” is his motto. When you succeed be pleased, but don’t become content with your lot, your competitor is waiting to step in your shoes as soon as you lapse, so make sure you don’t!

Persistency is vital. Whatever your dream, go with it, and don’t give up. Should you fail the first, second, third… time then continue to persevere. He provides examples of many well-known names from the MacDonald brothers, Henry Ford, to the inspirational Jim Eisenreich, people who didn’t give up, or listen to those negative influences. Through the motivational quotes and messages strewn copiously throughout the audiobook, the reasons why those who succeed do so, are laid out clearly. Be brave, think outside the box, follow that dream, and then dream bigger, and better. Remember success might not happen overnight, but if you never go for it, you can never win. So stick with it, work hard and learn from those around you and, you will make it.


Which character – as performed by Sean Tivenan – was your favourite?

Daniel Milstein, he is a true inspiration!

The knowledge that eighty-six percent of millionaires are self-made, and two thirds of the world’s billionaires made their fortune from scratch, given that information the only question can be what’s stopping you?

I am so glad I purchased this audiobook and will follow the authors guide to success, learn from him, and others, then show the world just what I can achieve!