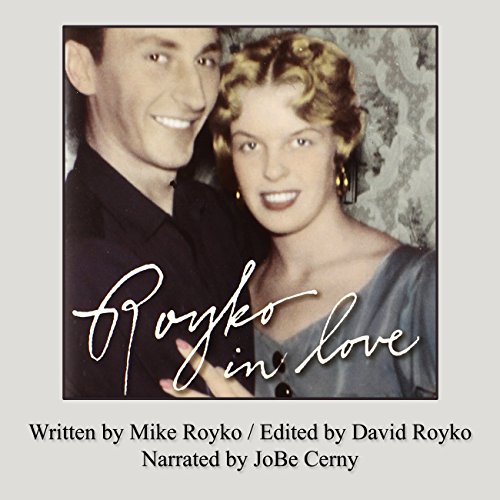 Street-smart, wickedly funny, piercingly perceptive, and eloquent enough to win a Pulitzer Prize, Mike Royko continues to have legions of devoted fans who still wonder "what Royko would have said" about some outrageous piece of news. One thing he hardly ever wrote or talked about, though, was his private life, especially the time he shared with his first wife, Carol. She was the love of his life, and her premature death at the age of 44 shook him to his soul. Mike's unforgettable public tribute to Carol was a heart-wrenching column written on what would have been her 45th birthday, "A November Farewell". his most famous and requested piece, it was the end of an untold story.

Royko in Love offers that story's moving and utterly beguiling beginning in letters that "Mick" Royko, then a young airman, wrote to his childhood sweetheart, Carol Duckman. He had been in love with her since they were kids on Chicago's northwest side, but she was a beauty and he was, well, anything but. Before leaving for Korea, he was crushed to hear she was getting married, but after returning to Blaine Air Force Base in Washington, he learned she was getting a divorce. Mick soon began to woo Carol in a stream of letters that are as fervent as they are funny. Collected here for the first time, Royko's letters to Carol are a mixture of sweet seduction, sarcastic observations on military life, a Chicago kid's wry view of rural folk, the pain of self-doubt, and the fear of losing what is finally so close, but literally so far. His only weapons against Carol's many suitors were his pen, his ardor, and his brilliance. And they won her heart.

What listeners say about Royko in Love