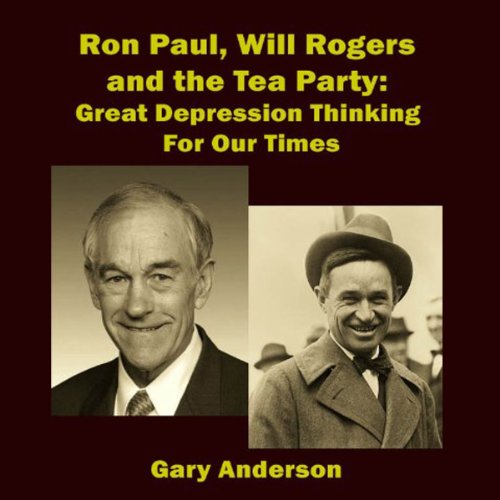 Ron Paul, Will Rogers and the Tea Party

The Great Depression was a time that saw the emergence of a great figure, Will Rogers. His thought was forceful and single minded about what needed to be done to fix the nation in the aftermath of predatory behavior by international financiers. An analysis of the Tea Party and Ron Paul is made based upon this tradition of Great Depression thinking. This audiobook reveals the real desires of the TBTF banks and the IMF and the US central bank, the Federal Reserve. Citizens must inform themselves as to these motives and desires, which lead to ruin and which were not destroyed by the housing crash of 2007.

Certainly, the history of the modern central banking system, including our Federal Reserve Bank is the blueprint for understanding the financial world order. Lowering and raising interest rates is not all that the central banks do. Exposing the other nefarious activities of the private central banks and discussing how to survive both as individuals and as a nation becomes an important discussion to have.

While history shows that the sovereignty of nations comes with danger, the abdication of sovereignty brings us into uncharted waters where there is no accountability from world leaders. The analysis of the financial system that follows exposes the financial order and its impact on sovereign nations then and now. No one has a crystal ball, but more and more, the bankers want to be respected and be your friends. While the big bankers are not worthy of respect, nor are they your friends, this motive drives them to strive for more transparency. But be assured, the interest of the Fed is to protect the big banks, and Main Street is not the constituency.

This audiobook discusses issues regarding Ron Paul, the Tea Party, the TBTF banks and how Will Rogers would have approached these issues in our time and going forward.

Will Rogers was a great man. Ron Paul cannot yet walk in his shoes.

What listeners say about Ron Paul, Will Rogers and the Tea Party