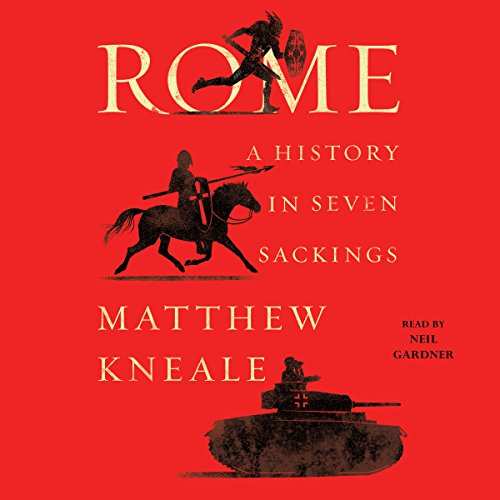 By: Matthew Kneale
Narrated by: Neil Gardner
Try for $0.00

Novelist and historian Matthew Kneale, a longtime resident of Rome, tells the story of the Eternal City - from the early Roman Republic through the Renaissance and the Reformation to Mussolini and the German occupation in World War Two - through pivotal moments that defined its history.

Rome, the Eternal City. It is a hugely popular tourist destination with a rich history, famed for such sites as the Colosseum, the Forum, the Pantheon, St. Peter’s, and the Vatican. In no other city is history as present as it is in Rome. Today visitors can stand on bridges that Julius Caesar and Cicero crossed; walk around temples in the footsteps of emperors; visit churches from the earliest days of Christianity.

This is all the more remarkable considering what the city has endured over the centuries. It has been ravaged by fires, floods, earthquakes, and - most of all - by roving armies. These have invaded repeatedly, from ancient times to as recently as 1943. Many times Romans have shrugged off catastrophe and remade their city anew.

Matthew Kneale uses seven of these crisis moments to create a powerful and captivating account of Rome’s extraordinary history. He paints portraits of the city before each assault, describing what it looked like, felt like, smelled like and how Romans, both rich and poor, lived their everyday lives. He shows how the attacks transformed Rome - sometimes for the better. With drama and humor he brings to life the city of Augustus, of Michelangelo and Bernini, of Garibaldi and Mussolini, and of popes both saintly and very worldly. He shows how Rome became the chaotic and wondrous place it is today. Rome: A History in Seven Sackings offers a unique look at a truly remarkable city.

"Kneale's account is a masterpiece of pacing and suspense. Characters from the city's history spring to life in his hands." (The Sunday Times [London])

What listeners say about Rome

Lack of language skills an irritation

Even if one can accept English schoolboy pronunciation (I presume) of historic Italian names like "Medici" and "Citta Vecchia", etc., why hasn't reader bothered to learn how say the sentences which are quotes in actual modern Italian, not to mention that he calls the extremely well-known French writer Andre Gide "Gheed"? This is not the first time I have heard an Audible book where the reader is clearly way out of his/her depth when a good grasp of foreign pronunciation would seem a basic requirement. The book is a good presentation of a lot of Roman history, and I greatly enjoyed it when I read it in written form, but I find the narration of the Audible version a distracting irritation.

Not as good as I had hoped

I guess I ought to have expected that this book would not be comprehensive or even particularly substantive, in that it explicitly states that it’s “in 7 sackings.” But I found it choppy and unsatisfying, vaulting, as it does, over 4 or 5 centuries at a time. The author is erudite enough, and has a fun, breezy style, but I found it disappointing.
The narrator’s pronunciation of Italian words and place names was appallingly distracting.

a very interesting book: as a Roman I only have a couple of observations. La Garbatella, as a roman "borgata" is not the way the author describes, as it still is one of the best efforts of fascist architecture. My main problem with the audible book is - however - the constant mispronunciation of any and every word in Italian. Statistically Mr. Gardner should have occasionally stumbled on the stress on the right syllable or managed to make the sound of an Italian word understandable. It is not the case. Naturally to read a book in English one is not required to be fluent in other languages, but maybe the reader could have obtained a modicum of information before starting his work (even André Gide's name is mispronounced, leading me to believe that french language or literature are not his forte either). The book is otherwise well read and pleasant to follow, however, hence the 2 stars on performance.

The book does a good job of showing Roman history through the seven sackings and tying those events to the larger history. Not a complete history of the city by any means, but a well-written, quick-moving tale. The narrator did pronounce some non-English words and names oddly -- not sure if he was using the British pronunciation or just mispronouncing. Also note that the print book has a photo section that is not included in the Audible version.