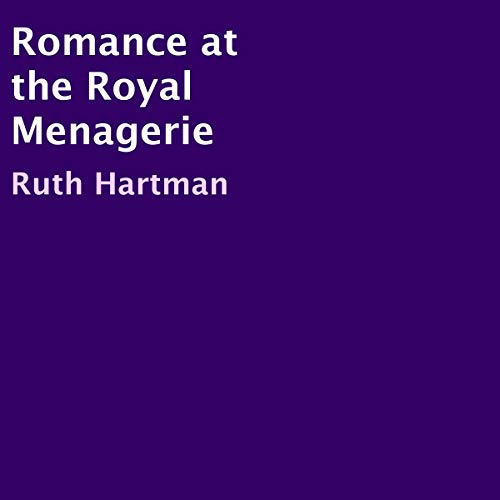 Romance at the Royal Menagerie

John Fairgate is torn by the fact that he'll inherit the title of baron upon his uncle’s death. Especially given that his uncle insists that he give up ornithology and marry a childhood acquaintance.

The first request, John will honor no matter how much he hates the idea. But marrying a shrew who makes his skin crawl, he simply cannot do. Meeting Miss Francesca Hartwell at the zoo has given him other ideas for a wife. But she’s not titled or wealthy. How will John be able to convince his uncle that she’s the woman of his heart?

What listeners say about Romance at the Royal Menagerie

Mild Spoilers
Summary: Poor but lovely girl meets enchanting rich guy who’s visiting the zoo her father works at. You could probably predict the ending from the title. Francesca (Franny) Hartwell and John Fairgate are from distinctly different social classes.

Additional Comments:
- I hardly ever read any sort of regency romance, but I seem to be tripping over it these last few weeks. Since my pool of the genre’s pretty limited, I can’t compare too much to others, but I can say I find the attitude shifts at the end highly suspect. (No, no, no, no … well, if it’ll make you happy, feel free to break all social conventions.)
- Characters 3.5/5: There’s a distinct lack of a real antagonist. Cartwright’s more of an annoying gnat since John’s not interested in her at all. There would have been more tension if she had some redeeming qualities and was ever some sort of competition for his affections. Conversely, there might have been more tension if Francesca had a suitor of a suitable class or something besides almost mystical powers over large cats. While interesting, we don’t really see her help little old ladies across the street or anything. What makes her the sweet, innocent protagonist we’re supposed to root for?
- Plot 4/5: It’s kind of hard to predict passage of time in here. The sideplot with the birth of the leopards is neat. I know the story’s not really about John and his occupation, but we don’t really see him do anything at all except visit the zoo this entire book. Also, if he’s really into birds, why doesn’t he speak more about it?
- Cover?? I know I’m not supposed to judge a book by its cover, but there’s a reason these things matter. The ebook has a decent cover, so why does the audiobook get zip?
- Narration was done well. There’s good variety between the characters.

Conclusion: Definitely fits in the Sweet Regency Romance genre. It’s clean. It’s got some romance.
*I received a free copy. I have chosen to review it. All thoughts are my own.

Francesca Hartwell loves cats of all kinds, including the big cats, all of them, and luckily for her, her father is the caretaker of big cats in the Tower of London's Royal Menagerie. Ever since her mother ran off to become the mistress of an earl, Francesca has pent most of her time with her father at the menagerie,. More to his distress than his pleasure, she has proved to have a real talent for handling the big cats.

They are absolutely dependent on his income from this job, and the Head Keeper would be very displeased to know that she was entering the cages, so she can only do so after hours.

And then one day she meets John Fairgate, an obviously well-born and wealthy man, visiting the menagerie, and he shares her love of big cats.

He apparently is not titled, and that's a good thing because her father is never going to forgive losing his wife to a titled nobleman. But John Fairgate could be the new donor the menagerie needs to care for the animals and keep her father employed, and he doesn't have a title...

John Fairgate is the heir of his Uncle, Baron Paddington. His beloved uncle has just a few requirements for him. Be ready to inherit the title and its responsibilities. Give up his ornithology research, because it's incompatible with devoting enough time to future duties as the Baron.

And marry a suitable wife, specifically, a woman he has known since they were both children, Miss Jezebel Cartwright. Miss Cartwright's father was his own dear friend, and they had long agreed it would be just ideal if the two children married when the time came. What the Baron doesn't recognize, but John does, is that Jezebel Cartwright is a malicious shrew, who, in the real Regency London, would have been ruined fairly quickly for her shameless, and perhaps more to the point, rather crude and obvious, attempts to get her hooks into John, whom she regards as her own property.

John, Francesca, Francesca's father, and John's uncle are all, ultimately, smart, decent, likable people. Francesca and John are both courageous and honorable, and are not going to do the wrong thing.

Jezebel Cartwright, on the other hand, probably can't spell honor. Or honour, if we're being picky and English, which would be appropriate for a Regency romance.

So, negatives: No, sorry, I can't imagine the cat caretaker's daughter at the Royal Menagerie in early 19th century London being educated and polished enough to ever pass muster as a future Baron's wife. Jezebel Cartwright is so far over the top that she's coming down the other side. If you're sensitive to such things, and I often am, you're going to be rolling your eyes pretty quickly.

Yet, somehow, I really enjoyed this one, even while I was rolling my eyes. It's fun, and I like these people.

So, recommended with the stated caveats.

I received a free copy of this audiobook from the author and am reviewing it voluntarily.

It's mid 2020 and the year of the Tiger King, so it's only appropriate to listen to a book featuring big cats. Francesca Hartwell's father is a keeper at the zoo at the Tower of London. Francesca spends her time there every day helping to maintain the big cat cages, and making friends with the regal beasts. It's there she meets John Fairgate and falls for him immediately. Francesca doesn't know that John is heir to a baronetcy, and his uncle has required that he marry someone else. And John can't get Francesca's bravery and wit out of his mind or heart.

This was a sweet clean read with some fun side characters! I loved the descriptions and interactions with the cats and other creatures at the zoo, of course. John and Francesca had a fun back and forth and their conversations were a treat. It was an enjoyable listen and I'd definitely try more by this author.

The narration was well done and pulled me right into the story. I requested a copy of the audiobook, and I'm voluntarily leaving a review.

OMG this book is so good!

This book is my all-time favorite regency romance. As a matter of fact I want to read it again… I am not lying. From the very beginning the book takes off and doesn’t let up until the end, which I must say is a great ending. From Francesca‘s inner dialogue to the shrill voice the narrator gave jazz a bell cart right the book is awesome. The narrator does such a great job I am going to vote for her for audiobook voice of the year again I am so serious. I am so excited for this book and wish everyone can read it. This is the first book I shared on my Facebook from Audible it is that awesome! You must read it… It is so good!

The story was a sweet romance, hand holding only. I found it a little improbable, given that a well spoken young woman would be allowed to work in with the animals, let alone go into the cages. Having said this, I did like the characters of Francesca and John. They were both caring people and very attracted to each other. There were a few humorous moments and a villain who tries to stop their romance. However I’m sorry to say that my enjoyment was spoiled by the narrator. At times her voice was quite shrill and strident at others, not an easy voice to listen to.

John is a wonderful character.

This is a match made in heaven two animal lovers coming together. It has some downright funny parts to it and of course, there is drama but the author has blended it so very well together. It was not long and that was a good thing because I could not stop listening to it. Julie Hinton has such a wonderful voice it is hard to believe she was not the real Miss Francesca Hartwell. I highly recommend this audiobook it was pure entertainment.

Took 4 attempts to listen to this

I received a free copy of the book so I could write a free and fair review. If I hadn’t I would have stopped listening by chapter 4.

The narrator was shrill and where she thought her accents were from is a mystery. I’m English and I had to work hard to understand some of the things she said. It was a constant niggle that detracted from the story. In face I almost decided to abandon the audio book and go with the Kindle version.

The story was fun if somewhat unbelievable - particularly given the mores of the period. However I enjoyed the story but not the performance.

Shame, what should have been a pleasure wasn’t