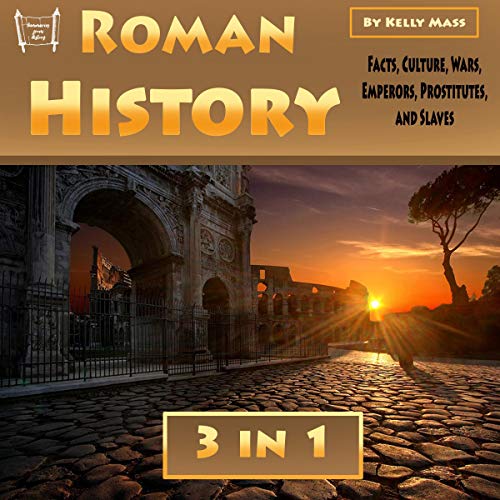 By: Kelly Mass
Narrated by: Miriam Webster
Try for $0.00

In this audiobook bundle, you get the best historical facts and knowledge you deserve.

In the first audiobook, various aspects of the Roman Empire, its government, and its place in human history will be discussed. You'll learn more about leaders, habits, and practices. You'll find out how the empire died off and collapsed.

In the second audiobook, a number of emperors come to light. Caligula, Nero, Marcus Aurelius, and Julius Caesar are only a few of the many emperors whose Roman lives are detailed in this comprehensive guide.

In the third audiobook, Spartacus is covered in the first few sections. His rebellion against his slave owners typified several other rebellious acts, and is the key to what was common in those days to do with slaves, prostitutes, and how families were treated. The ins and outs of Roman society are shown in this elaborate audiobook.

All in all, you get over plenty of explanations and clarifications of what the Romans and their empire looked about 2,000 years ago.

What listeners say about Roman History: 3 in 1

I'm not sure where to begin

About the price and length: This book is a bundle, but it could have very well been just a large book, since none of the chapters are the same, and they all go along with each other. It's as if the author had so much to say that she split all that information up into 3 books and then put them together in this bundle. Needless to say, if you have a credit, this is the best deal. If you buy it at full price, it's more expensive, but it's still worth it, in my opinion. About 11 hours of Roman history is plenty for me to be entertained.

About the information: Although some parts were a bit more flat and less passionate, other parts were full of intriguing facts and the dealings of the people and the emperors, which determined how the culture and the economy thrived. I loved the parts about the sexuality (honestly), the family life, and the justice system. Why? Because it shows that they were people with some of the same issues and privileges as we have today, and that people are just people. Some things will never change. Also, I was sincerely fascinated by the difference between the “good” and “bad” Roman emperors. Some were monsters while others were inspiring leaders. It just goes to show you how people can be so different, and the major influence they have on a nation or people.

About the narrator: Miriam is a professional. You can hear that immediately. Her voice is somewhat high-pitched, and the pace was a little faster than some other books, but I could easily follow along, and I kind of liked it, especially after getting used to listening to her. I think Kelly picked a good one. I think there were a few moments when the microphone was a little louder than intended, but overall, I was impressed and I am happy with the book I listened to.

The verdict: I recommend this book to anyone interested in Roman history. It’s a great way to get to know the players, what was going on, and some false concepts we have about that important era in our world’s history. Sitting back and listening to it, you can really feel like you’re going back in time and envision what people did, and how the Mediterranean world was organized back then.

This is a large book. I mean, I guess I don’t have to tell you that because you can see the length on the sales page. But with that being said, do I need to say anything else? Well, yes, actually. Just because a book is long, doesn’t mean it’s always good. I guess you can hear the retail sample with the voice of the narrator yourself, so I don’t have to commend on that either. I guess it’s also self-evident that that voice is constant through the whole book, so you know what to expect. As for me, I liked listening to her. She articulates well and well… good job on all those Latin names. It was probably not easy to pronounce those. Aside from that, the content was interesting. I am always interested in the Romans, and there was plenty of information that was truthful and factual to feast my ears on. So yes, 5 stars for me.

Finally something worth it to spend my credit on. This is the kind of book I was looking for. Thanks, Kelly, and thanks Miriam. You put a lot of effort into creating this. I can tell. Looking forward to more books from the "Summaries of History" series.

I was blown away

I mean, the length of the book says a lot already. Granted, there were a few boring parts, but the story and narrative kept being interesting most of the time. All the aspects of Roman society, their emperors, their army, the downfall of the entire empire, and a lot more, are put in this book bundle. Great stuff. Great value. No complaints..

I swear, guys, get it with your credit. Get it? It's the best value. Anyway, I liked this book because of all the information, a little drama, and all the things I learned about the emperors, the everyday life, the slavery, and so many aspects of the Roman Empire in the old days.

You should buy this

Aside from the simple fact that this book is 11 hours and 2 entire minutes (yes, that counts), you might pay attention to the fact that every little detail from Roman society has been covered by this. You cannot go through this thing and still be an ignorant idiot about Roman society unless you're deaf in one ear.

So let me summarize it for you: The description is there. The length is there. The sample is there. If you like Miriam Webster's voice and you want to learn about those clowns with their skirts and helmets who took over basically half of Europe, then what are you waiting for?

I was impressed, not only by the size (size isn't everything) but also by the story. The narrator was pretty good. The story was awesome. I mean, yeah, there were some historical facts you could probably find on Wikipedia, but Wikipedia is not going to read it to me when I'm in the car or lying on the beach with my headphones, so there.

There were many weird pronunciations, and not only of the latin words.
As for the book itself, it felt a little disjointed.

If you are even remotely interested in Roman history, don’t waste your time. These books are only an irritating narrator reading a list of facts. The narration was bland and stiff. I tried to listen but she kept mispronouncing words.

Cant listen to this for more then 5 seconds

Awful, terrible voice Can't listen to this for more than 5 seconds a challenge to listen too.

The narrator's pronunciation is just awful

I can't believe that no one tried to prevent this getting published, the narrator has zero understanding of how to pronounce classical names and terms. Its honestly laughable, virtually every name is just guessed haphazardly. Why not give some guidance or find someone who has at least a minimal knowledge of how we pronounce these names in English. In my opinion this just trashes all over our understanding of history and helps to spread misunderstanding.