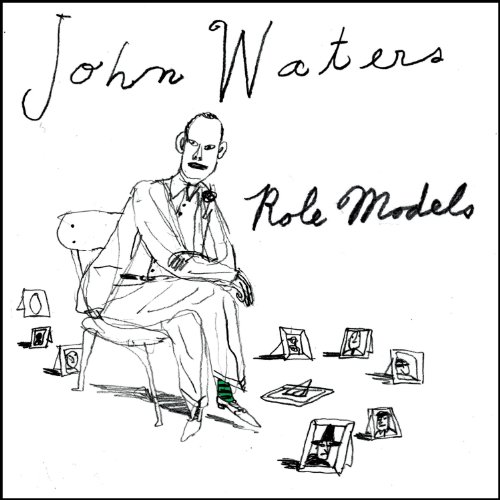 Role Models is filmmaker John Waters's self-portrait told through intimate profiles of favorite personalities---some famous, some unknown, some criminal, some surprisingly middle-of-the-road. From Esther Martin, owner of the scariest bar in Baltimore, to the American playwright Tennessee Williams; from the atheist leader Madalyn Murray O'Hair to the insane martyr Saint Catherine of Siena; from the English novelist Denton Welch to the timelessly appealing singer Johnny Mathis---these are the extreme figures who helped the author form his own brand of neurotic happiness. Role Models is a personal invitation into one of the most unique, perverse, and hilarious artistic minds of our time.

"Waters delivers a worthy tribute to his personal pantheon of artistic icons. An impressive, heartfelt collection by a true American iconoclast." (Kirkus)

It's rare that I laugh out loud when reading a book. During John Water's superb reading of his own book, this happened over and over and over again. Great literature? Probably not, but lots of tongue-in-cheek fun for listeners like me, who have a warped sense of humor. Don't miss this one.

I don't know how he does it, but John Waters pushes the envelope further in each chapter he writes. Without a doubt, this is the most vulgar book I've ever read, but also very humorous and honest. Waters promotes, even celebrates what mainstream America disdains, and does it with profound joy and insight.

This is a very funny book. I think it is for people who already know John Waters, so they will not be shocked by his stories. It was so honest and believable even with the crazy people depicted in it. My only fault was that for some reason, my audio download did not have the ending of the book downloaded on it. I plan to call customer service because I could listen to John Waters all day. I suggest you be sure to listen to the sample before buying, because his humor may be offensive to some readers. I however loved it.

John Waters is a national treasure.

I could listen to John Waters everyday and I wish he had a daily podcast. He reveals such amazing obscure films, books, and performers that often go without credit. There were quite a few times I laughed out loud listening to this and it's like he's talking to you instead of reading. Even the books he talked about which I'm not interested in reading kept me listening. Hopefully he'll release his previous books in audio format. He's got such a great passion for all things the general public calls "bad taste" or makes them aware of it with his own flair.

Just like having a ticket to Mr. Waters' show

If you have been to one of John Waters' talks you have heard some of these stories before. He is just as animated and enthusiastic on this reading as he is on stage. The characters, almost all real people, are fascinating. And getting a glimpse into the author's brain, with his own voice, is both scary and amazing. Though my personality is nearly the opposite of his, I have always seem him as something of a hero. I enjoyed listening a whole lot and will probably do a repeat sometime. (Be prepared for some raunchy stuff, though not much cursing.)

Everything You’d Hope It Would Be

There are chapters of this book where Waters reflects with sincere pathos on individuals for whom you might not normally feel sympathy. A chapter concerning his friendship with Leslie van Houten stuck with me long after it ended. Other chapters- which aren’t appropriate to recap here, had me cackling like a crazy person while I listened on headphones.

Waters comes across here as funny, warm, insightful, kind, and gleefully perverted...all the things you’d suspect he would be if you’re familiar with his work. I’ve listened to a ton of audiobooks and this is one of the few I know I’ll absolutely listen to again. If you have any interest in John Waters, don’t pass up this book, just buy it. It really is that good.

Belt, Turned 45 Degrees to the Right

This book is so good it's stupid. John Waters is a hero of mine, and his latest book has collected the myriad reasons for my reverence and worship into a hilarious, profound, tight, sweaty autobiographical work. He's dirty, funny, intelligent, wise, gross, moving, ironic, etc. It's completely enjoyable. It's a tricky thing to write a book about OTHER people that still appeals to YOUR fans, but the information and anecdotes that delve into the fascinating lives of his so-called role models always end up revealing just as much about Mr. Waters himself.

Now, my sadistic sense of humor begs me not to say this, but I feel compelled to warn you: the subjects of this book, while being completely honest to Mr. Waters' character, often fall far from the the subjects of some of his more popular movies (e.g. Hairspray, Cry-Baby). There's a lot to admire about him, but there's a lot about him that many will never admire. If you can't stomach long passages about gay porn auteurs then turn around right this minute (we don't want you here anyway). But if you think you're up for it, please, come right on in, have a drink, there's plenty of room for you.

Role Models from the Far Side

If you could sum up Role Models in three words, what would they be?

It was a very entertaining read, you would not expect less from John Waters.

He was as it was a book about the people who have had an impact on his life.

What does John Waters bring to the story that you wouldn’t experience if you just read the book?

I think it makes it more interesting having the book read by the author.

Truth is stranger than fiction

I disagree with his take on Leslie Van Houten, and his continuing plea to have this woman freed. If it had not been for the abolition of the death penalty this would be mute.
Her victims cant go home. She has diminished her involvement in these crimes by saying she stabbed the woman after she was dead, as though it is less of an offence.
You take a life you should serve a life sentence. Even if you have come to the realisation that what you did was abhorrent. Its called punishment. I think the reason all the Manson killers are still in prison is because they chose random innocent people to slaughter, they showed no mercy and now are being shown no mercy in return.

The moment I heard Waters talking about this book (last year on KQED's Forum) I hoped it would be released on Audible. How cool to get to hear the book read by the author! Lucky day! I'm going to enjoy this one!

A great guide to a filthy mind