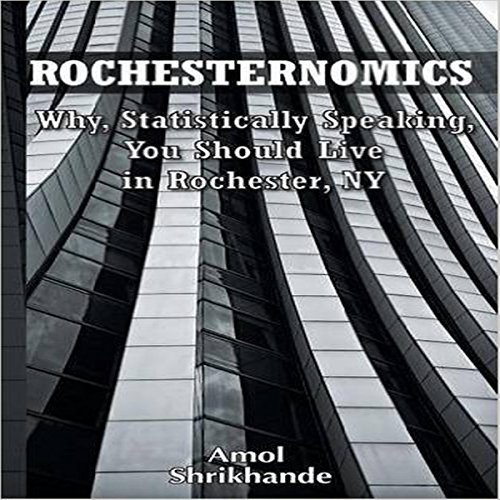 By: Amol Shrikhande
Narrated by: Josh Brogadir
Try for $0.00

If only a large metropolitan area could offer all of the following: a reasonably healthy economy, exceptional public education and high educational attainment, elite music and art, innumerable leisure activities, remarkably affordable housing, strikingly short commute times, some of the safest weather conditions in the country, near universal health care, solid public transportation, a culture of ingenuity, and an overall tradition of acceptance. Believe it or not, such an area exists. The only catch is that popular perception actually makes the area seem undesirable. Rochesternomics provides data-driven insight to overcome popular perception and illustrate why Rochester, New York, is this hidden gem.

Amol Shrikhande was born in Milwaukee, Wisconsin, and raised outside New Haven, Connecticut. He has spent large chunks of time in Boston, Massachusetts; St. Louis, Missouri; and New York City. In 2010, for no apparent reason, he convinced himself and his wife to move to a place where they knew absolutely nobody: Rochester, New York. In between trying to raise two children, he and his wife are both practicing physicians.

What listeners say about Rochesternomics

No Reviews are Available