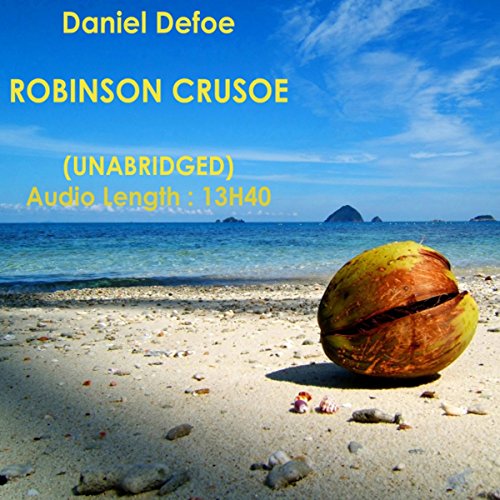 By: Daniel Defoe
Narrated by: Denny Sayers
Try for $0.00

First published in 1719, Daniel Defoe’s Robinson Crusoe is commonly considered as the first novel in English. Based on the real-life experience of Alexander Selkirk, who spent four years on a Pacific island, it is the account of the 28-year stay of an English sailor on a nearly uninhabited island near America. Actually, Robinson Crusoe has to share the island with cannibals. He eventually manages to save some of their victims, one of them becoming his servant under the name Man Friday.

The story has aroused the imagination of many generations and has remained popular ever since its first publication. This book is considered one of the most widely published books in history.

What listeners say about Robinson Crusoe

If you can get past the fact that it sounds like he is reading inside a tin can, this narrator is absolutely impossible to listen to for more than a few minutes without zoning out. He pauses at the most inoportune times, right in. ......... the middle of a sentence. I don't even know what to say about this. I laughed out loud when I first heard it. Was this done in someone's basement? Was the guy holding his nose? I got through precisely 24 minutes before I gave up. And that was listening on 1-1/2 times speed. Awful.

This guy shouldn't be allowed to read outloud

I liken the experience to cutting yourself then pouring lemon juice on the wound. I bet the story is good though.

Quality of recording was beneath the reputation of Audible. The book is a classic and highly recommended in another form.

this was a very good book might read it again..

very good book. enjoyed the planting of food and how crusoe survived on the island

This is very poor recording & sound quality. It sounds like a guy sitting on his front porch reading & recording it into a cheap microphone. This disappointing and far below Audible standards. Find a better version

The story and book are great. The narration is stilted and it sounds like this reading was the narrators first for this book.

Perfect for a 4th grader following along!

What made the experience of listening to Robinson Crusoe the most enjoyable?

Although I can see why many people would find this reading slow, it is perfect for our purposes. I found the writing to be a reason for difficult reading. I tried to help my son read it in places, and I felt very frustrated by its flow. I decided to come to Audible and played several different samples for my son. I laughed when he chose this one. It is the perfect speed for him to follow the words with the narrator, which eases my conscience since it is a main purpose of him reading it.

You've made a painful and necessary task more bearable. Thank you!

I cannot unfortunately say anything about the book itself, as I've not made it past the third chapter. The guy reading it makes the story as uninteresting as a dry history book, read by the sort of history teacher who puts you off history for the rest of your life. He pauses as he turns the page (no matter where he is in the sentence), draws a fresh breath when his lungs happen to require one, e.g. "at an inopportune (breather) moment". Even if the end of the sentence is just a word away. I couldn't stick with it even as a distraction from mind numbing chores. This is the first book I have not finished due to a narrator's skill, or lack thereof.

Holy cow! How could this poor guy think he could narrate a book?! Don't bother with this. I couldn't get through the first chapter, same as the other reviewer.

The Narration was so bad I couldn't even make it through the first chapter. Nothing to see here!!! Move along!!!