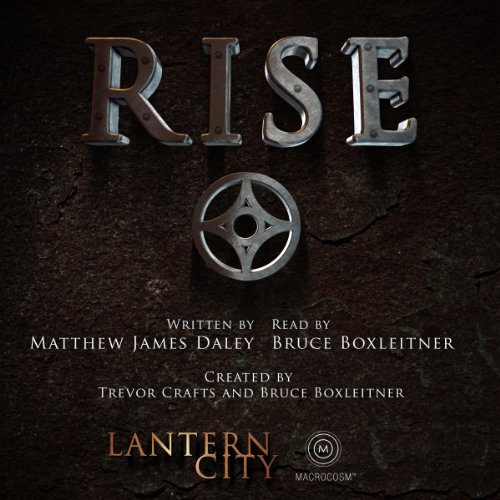 By: Matthew James Daley
Narrated by: Bruce Boxleitner
Try for $0.00

Visionary leader or despotic tyrant? Every day, the citizens of Lantern City ask themselves this of their young leader, Killian Grey, the fourth Grey ruler of the great walled city. But Killian is not the first member of the Grey family to elicit such a response.

Rise tells the story of Isaac Foster Grey, the first leader of Lantern City. Isaac's battles through misfortunes and his ultimate quest to save his family intertwine with a burning vengeance against his father's killer and that man's plan for domination over every citizen in the land of Hetra.

Rise is a journey through a fantastic world of myth, mystery, violence, and epic circumstance that challenges the definitions of good and evil. Rise tells of the legacy of the Grey family and begins the story of the creation of the enlightened and dark world of Lantern City.

What listeners say about Rise (A Lantern City Illustrated Novel)

I've never been a huge steampunk fan but after listening to Bruce Boxleitner's amazing voice talent reading this book I have to say I'm definitely a fan now. Fascinating, original world with the dark political hues of Game of Thrones it's worth listening to in preparation for the upcoming TV show and comic book series. Lots of promise for this creative concept. I just wish the story hadn't "ended" so soon! Talk about a cliffhanger!

All hype and steam, no substance

Whhaaaat is up with some of the high star reviews on Amazon? This is written HORRIBLY, in a tell-don't-show manner that just doesn't work for books. The narration dictates to us precisely what we're suppose to think of so-and-such and the details of the world are so vague that it's impossible to get a feel for where they are. Even if this were a tv series, the premise of the story wasn't interesting enough to convince me to watch. It's disjointed and nothing is described well (if at all).

Characters make abrupt choices without any proper development to make their decisions believable, and none of them are likable enough to really care about what happens to them anyway. I don't know what the male equivalent term to a 'marysue' is, but Isaac Grey is just that, and Killian is set up to be the same. This should not have been approved to be sold to a paying audience.