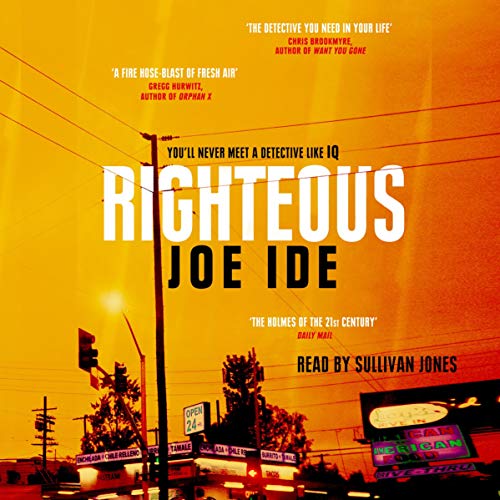 'In a way, the hate felt good. You were righteous, godlike, the dispenser of justice...'

Super-smart sleuth Isaiah Quintabe - IQ to his friends - has built a mostly respectable life for himself, helping out friends and neighbours when he can and taking the occasional case to make ends meet. But there is one mystery that still haunts him almost 10 years later - did his brother really die in a hit-and-run, or was there more to the story behind his death?

IQ has been approached by his brother's former girlfriend Sarita, whose younger sister, an erratic DJ and gambling addict, has gone missing in Las Vegas - with a frightening loan shark, Chinese Triad gangsters, and her own deadbeat boyfriend hot on her tail. Accompanied once more by his fast-talking, don't-call-me-a-sidekick partner Dodson, IQ heads off for the casinos and massage parlours of Las Vegas.

His quest takes an unexpected turn when he meets a criminal mastermind who knows something about the murky circumstances that surrounded his brother's death. But when Isaiah learns the truth, what will he do with it?

"Joe Ide is the best new discovery I've come across in a long time." (Michael Connelly)

What listeners say about Righteous

Not my usual listen.

Loved it. The narrator brought it to life , he was exceptional. Bring on IQ 3.

not quite as as good as the first

Another great story featuring the characters from the first story, and some great new ones too.
A little less intriguing this time around but still a riveting tale, and great take on a modern Sherlock.

Another awesome story from Joe Ide, just as good as the first with great characterisation and plot. Fabulous narration from an unbelievable talent.

Enjoyable but not as tight as the first.

Thankfully, the dodgy audio has been fixed this time around. Not as tight as the first, plot holes you could drive a drop-kicking JC Van Damme through, but still a thoroughly good read.

It feels more like a transitional novel: allowing IQ to head out of his hood and widen the parameters of the story- telling. As the book itself alludes, unless this happens, it’s not realistic to expect IQ to do much more than chase off playground bullies and abusive spouses without the whole thing becoming unbelievable. So it’s a necessary step on the way to letting the characters breathe.

After IQ I'd been patiently waiting for the sequel and was much worth it. Great story, good pace. Well enjoyed.

Go with the Flow

I guess you could listen to this without having listened to a previous IQ novel but it probably helps. The plot is complicated with many different characters and gangs. However, maybe that doesn't matter. Just listen to the quality of the writing and reading. Joe Ide has obviously done much research into the LA gangster scene which enhances the enjoyment of an exciting and amusing story. Sullivan Jones manages the large cast with great ease and adds to the fun.