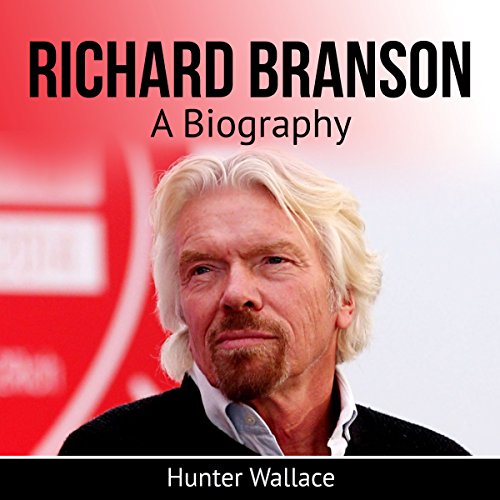 By: Hunter Wallace
Narrated by: Jimmy Kieffer
Try for $0.00

Sir Richard Branson is an English business magnate, investor and philanthropist. He founded the Virgin Group, which controls more than 400 companies. Branson expressed his desire to become an entrepreneur at a young age. His first business venture, at the age of 16, was a magazine called Student.

In 1970, he set up a mail-order record business. He opened a chain of record stores, Virgin Records-later known as Virgin Megastores-in 1972. Branson's Virgin brand grew rapidly during the 1980s, as he set up Virgin Atlantic airline and expanded the Virgin Records music label.

In March 2000, Branson was knighted at Buckingham Palace for "services to entrepreneurship". For his work in retail, music and transport (with interests in land, air, sea and space travel), his taste for adventure, and for his humanitarian work, he became a prominent figure.

In 2002, he was named in the BBC's poll of the 100 Greatest Britons. In 2004, he founded spaceflight corporation Virgin Galactic, noted for the SpaceShipOne project. In November 2017, Forbes listed Branson's estimated net worth at $5.1 billion.

What listeners say about Richard Branson

A brief look at the life of Branson

I ahve to admit, when I first saw these "Bite-sized Biographies" I was skeptical. I mean, seriously, how much could they jam into a 30 minute bio? Turns out, a lot. To be certain, this is nothing more than a scant summary of his life. It includes all relevant events, it just does not go into extreme depth when doing so. Still you might be surprised at just how much information is packed into the bio.

Branson is a fascinating man, and some of the things that happened to him are incredible, such as being forced by his mother to find his father, who was secreted in a 4 mile area, at the tender age of 4. Or him having a secret love who just happened to be the daughter of the headmaster of his school. The book really focuses on his failures and triumphs, but really emphasizes how he learned from every mistake he made.

Jimmy Kieffer does a great job as the narrator. He makes listening easy, and he keeps your attention. Very commanding voice. Even though I did receive a promo code for this review it in no way influenced my considerations of the material, and in fact, inspired me to be more honest. In fact, getting a code generally makes me harsher as a reviewer as I am more often concerned what someone like Me will decide based on my review.

Refusal to let your failures stop you is part of the recipe for Richard's success. Starting his first business venture at age 16, this opportunist was determined to be business savvy even with learning disabilities. This book is a short summary of the life of this virgin molgul. Music fans with limited time will enjoy this short bio on the birth of virgin records. I was given this free review copy and have voluntary left this review.

I had no idea that Richard Branson had founded the Virgin Records Label. This guy was instrumental in changing the way the music industry ran in the late 70's and 80's. WOW.

Very informative biography, parred down to the most important facts.

The narration was great as well.

I requested a free review copy of this audiobook and i am leaving an honest and voluntary review.

This story of Richard Branson is well narrated and interesting to listen to. I enjoyed learning how Richard Branson overcame many difficulties in his life and also learned from his many mistakes to become a well-respected personality known for his business acumen and personal drive on both sides of the Atlantic and throughout the world.

My only suggestion for the author would be to have written an even longer book which might consist of stories of a number of well-known (or even not so well-known) people from whom we might get inspiration and ideas. I loved this audio book although it was very short.

I was given this free audiobook at my own request and have voluntarily left this review.

I once saw Richard Branson in a short interview I was watching on TV and thought he seemed like a very likable man. I didn't know much about him at the time but was impressed by what I saw and heard that day. I was offered this book as a review opportunity and was very excited to possibly learn a little bit about him. It is a fairly short biography but it does give the basic information I wanted to know. I am happy to say I am even more impressed with him after learning more and thankful for the opportunity to have done so. This is a wonderful book that is easy to listen to. The writing is very good and so is the narration. I was voluntarily provided this review copy audiobook at no charge by the author, publisher and/or narrator.

I wonder what I could do?

Lives like Branson’s should make us all stop and take inventory of our hours and years.

Here is an entrepreneur who put British Airways to shame in their own industry, and literally aimed for the moon and landed among the stars. You only have to be right once, and this guy seems to hit the jackpot with each new endeavor.

Not particularly good writing and the narration was blah. I was disappointed. For a good bio, read about Elon Musk.

I learned a lot

The King of Virgin

An interesting though extremely brief biography of yet another conventional education failure who went on to become a brilliant businessman and innovator. Interesting and informative, but only enough content to whet your interest for a more in depth look.