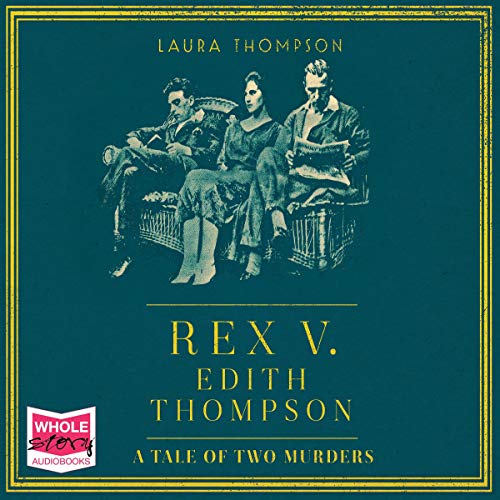 On the night of 3 October 1922, in the quiet suburb of Ilford, Edith Thompson and her husband, Percy, were walking home after an evening spent at a London theatre, when a man sprang out of the darkness and stabbed Percy to death.

The assailant was Frederick Bywaters, a 20-year-old merchant seaman who had been Edith's lover. When the police learned of his relationship with Edith, she was arrested as his accomplice, despite protesting her innocence. The remarkably intense love letters Edith wrote to Freddy - some of them couched in ambiguous language - were read out at their trial for murder at the Old Bailey. They would seal her fate: Edith and Freddy were hanged for the murder of Percy Thompson in January 1923.

Freddy was demonstrably guilty; but was Edith truly so?

I was so disappointed! I was looking forward to hearing this book; I always found the case very interesting. Unfortunately, the author’s narration makes it pretty much unlistenable, as is often the case when authors read their own work. Please, please find a decent narrator! It makes so much difference...

hang me instead! the narrator needs shot!

after just one and a half chapters of listening to an author reading their own work I was wishing I could change places with Edith Thomson and be put out of my misery. I couldn't bear to listen to anymore of her almost monotone, badly read book.... so I wasted my money on something I thought was going to be interesting. IMO was as boring as watching pain dry... if I could ask audio book for a refund this would be one of those very few times I genuinely would request one!

JUST TOO LONG.....When I saw there were still four hours left of micro interpretation and eternal weighing up of motive and volition I just had to stop......

A heart wrenching account, lovingly researched. Loved the narrator (also the author) too, who's emotional investment in the case was all too evident throughout. A thrilling re-examination of one of the 20th centuries most divisive, and (as this book convincingly argues) shameful murder trials.