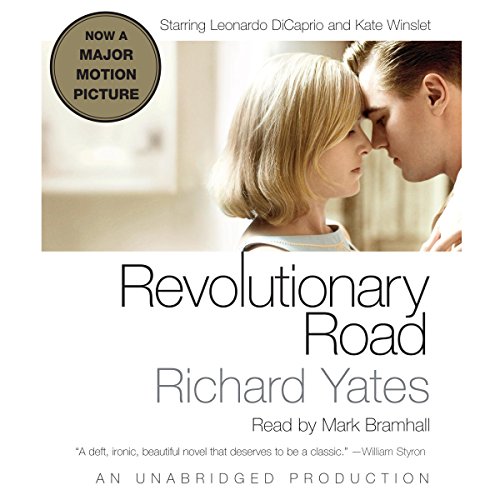 By: Richard Yates
Narrated by: Mark Bramhall
Try for $0.00

From the moment of its publication in 1961, this masterpiece of realistic fiction was hailed as the most evocative portrayal of the opulent desolation of the American suburbs. It's the story of Frank and April Wheeler, a bright, beautiful, and talented couple who have lived on the assumption that greatness is only just around the corner. With heartbreaking compassion and remorseless clarity, Richard Yates shows how Frank and April mortgage their spiritual birthright, betraying not only each other, but their best selves. In his introduction to this edition, novelist Richard Ford pays homage to the novel's lasting influence and enduring power.
©2000 Richard Yates (P)2008 Random House Audio
Family Life Literary Fiction Psychological Historical Fiction 20th Century
Show more Show less

"The Great Gatsby of my time...one of the best books by a member of my generation." (Kurt Vonnegut)
"Beautifully crafted...a remarkable and deeply troubling book." (Michiko Kakutani, The New York Times)
"A deft, ironic, beautiful novel that deserves to be a classic." (William Styron)

Featured Article: 40+ Inspirational Quotes for When You Need Some Words of Reassurance


When life gets tough or self-doubt strikes, a few words of inspiration can make an incredible difference. And who better to turn to for words of inspiration than gifted authors? In this collection of quotes from noted novelists, poets, and memoirists, you'll find the right words to lift your spirits and keep you shining. From a variety of celebrated authors, these quotes will inspire you to follow your dreams, face your fears, do what's right, and believe in yourself.

What listeners say about Revolutionary Road

This is the perfect example for me of the importance of reading the book before I see the movie. I think if I had read the book first many subtle but important points missed in the movie would have made the story much better. The movie stressed odd scenes and omitted powerful details that developed the characters and their predicaments to a tee. Plus the way a reader pictures the settings and the people never seems remotely the way a casting team will set things up. That said--I liked the book. It depicted a slice of life from that odd time period of the 50's beautifully. It is a sad book but the characters are fully human and the story engages throughout.

Soul-crushing...but in a good way!

Yeah, yeah Kate and Leo reunited on the big screen for the adaptation of Revolutionary Road, and while I enjoyed the movie, please don’t let it put you off or replace your reading of Richard Yates’ tremendous novel. Sure it’s depressing – it’s about realizing your life has become everything you never wanted it to be – but in Yates’ words, in Mark Bramhall’s narration, this is a powerful depressing: the kind of thought-provoking, heart-wrenching literature that we all need every once in a while.

I hated this book for the first three hours or so---very upsetting marital fighting! But once it takes off, this is quite a study of two people and their lives in the 50s. I finished this book a week ago and still thinking of April and Frank! I want to see the movie now and see how it compares.

These characters are so fragile and damaged. It was painful at times.....so close to home! This 1960's "perfect" suburbia family crumbles right before your eyes. Each one is as "dysfuntional" as the other. I didn't like the ending but sadly it is very real and believable.

Yates is a beautiful writer--descriptive in a way that deeply involves the reader. One of the things I appreciated most about this book, a runner-up for the National Book award in 1962, is the accuracy with which he represents the 1950s, everything from work cublicles, the dawning age of computers, suburban life, the rise of psychotherapy (and its oppressive authority) and of course the pressure to conform and the difficulty of taking a different path (a "revolutionary road"). A major theme of this book, which I think is surprising for its era, is the nature of masculinity and its perils--how very hard it was to be a "real" man in the 50s. Yates has great skill at using metaphor and does a wonderful job with character development. This book is also beautifully narrated. Not only is the narrator's voice a pleasure to listen to, but his representation of each character very talented. Yates's depiction of the 50s gives great insight about why the 1960s became "revolutionary."

Beautifully written and exquisitely narrated, this book is captivating. Though the story is not uplifting, the characters are real and their plight is familiar nearly 50 years after the story was written. While it would be easy for the listener to judge the Wheelers and the Campbells harshly, to do so would be to fall into the same trap that captured them.

They are pent up and repressed. Once they are able to see what is truly happening in their lives, things explode. Ironically, it is a man who is mentally ill who is able to make the most telling and accurate observations of what is occurring interpersonally.

This is a captivating audiobook and it is very well narrated.

Yates was doing suburban malaise decades before people were talking about the latest Mad Men episode (not to bash Mad Men... love that, too). His characters and dialogue are sharp and drip with subtext.
Excellent book and reader.

I found this book to be one I did not want to stop listening to; it got me through several sessions at the gym. Although the story is a very depressing one, it held my interest. It is well written and I thought the reader did an excellent job. The characters were all believable, like people you may know. I highly recommend this book if you can deal with unhappy stories.

This is a poignant, intense novel. Yates's characterizations are spot-on and his prose immaculate.
He tells the story of Frank and April Wheeler, a young couple who long to be special but who are trapped in the conventions of their middle class, middle of the road and mediocre marital existence.
Yates has created a harsh but perceptive criticism of the superficial American society of the time that rings true to the present day. The narrator does a fine job with the clearly distinguishable voices.
This is certainly not a light listen but it is a devastating one that you shouldn't miss.

Was recommended this by my daughter studying it for A level. So great to share a good book and share thoughts from different perspectives on the characters. I'm much more forgiving of the Wheelers because to me imperfection is normal and natural. It's still as current today as it must have been back then, though there are now more ways to avoid working efficiently and make illicit friendships.

It took a while to get going but stick with it as the plot gets better and then it's a case of not wanting to stop listening!

Undoubtedly the most underrated writer I have ever had the pleasure of reading!

The minute observations Yates presents in this novel are devastating and honest. A timeless tale.

I hated this. It maybe an accurate social critique of post-war middle class America, but if so, how depressing. It was harder to listen to than read, because of the harsh voice of the reader - again, maybe realistic but unpleasant. In the end I gave up, and will be returning it, hopefully for something more enjoyable.

A beautiful and fascinating story about the toll of conformity in suburbia, dishonesty and lack of self knowledge. Read very well, without any unnecessary flourishes that detract from the text

An intolerably dense novel made bearable by audibl

This novel is criminally overwritten and bland but the narration and performance made it a somewhat enjoyable experience. A book I would never choose to read (MA reading list) so thank the lord for audible coming to the rescue.

Loved the story and the descriptions were potent but not too long. Time for my next classic literature choice.

Really enjoyed this book. If you’re interested in 1950s America and the struggles with forced conformity and suburbia of the time, then I’d recommend reading this. Thought that the reader did a great job of getting the emotion out.

I think that Richard Yates must be the reincarnation of Edith Wharton! The same sharp knowledge of human nature, personality and the claustrophobic influence of the social milieu, wonderfully observed.

?He closed the door and started toward her with the corners of his mouth stretched tight in a look that he hoped would be full of love and humor and compassion; what he planned to do was bend down and kiss her and say 'Listen: you were wonderful.' But an almost imperceptible recoil of her shoulders told him that she didn't want to be touched, which left him uncertain what to do with his hands, and that was when it occurred to him that 'You were wonderful' might be exactly the wrong thing to say ? condescending, or at the very least naive and sentimental, and much too serious.
'Well,' he said instead. 'I guess it wasn't exactly a triumph or anything, was it?' And he stuck a cigarette jauntily in his lips and lit it with a flourish of his clicking Zippo.
'I guess not,' she said. 'I'll be ready in a minute.'
'No, that's okay, take your time.'
He pocketed both hands and curled the tired toes inside his shoes, looking down at them. Would 'You were wonderful' have been a better thing to say, after all? Almost anything, it now seemed, would have been a better thing to say than what he'd said. But he would have to think of better things to say later; right now it was all he could do to stand here and think about the double bourbon he would have when they stopped on the way home with the Campbells. He looked at himself in the mirror, tightening his jaw and turning his head a little to one side to give it a leaner, more commanding look, the face he had given himself in mirrors since boyhood and which no photograph had ever quite achieved, until with a start he found that she was watching him. Her own eyes were there in the mirror, trained on his for an uncomfortable moment before she lowered them to stare at the middle button of his coat.?

About the superficiality of people's lives and dreams quite slow moving but thoughtful and not overly exciting.

I was hesitant to listen to an audiobook because I knew it would be annoying if the reader intoned things differently than I would have in my head. How lucky I was to find a book read by Mark Bramhall! He is one of the best readers I've heard in my life, probably THE best American reader! In fact his reading reminded me very much of the way my father would read books when I was a child. He is so skilled that you can actually hear the smallest punctuation marks in his voice- little things like parentheses, dashes, and quotation marks! Such a joy to listen to, I wish I could give him more than five stars!