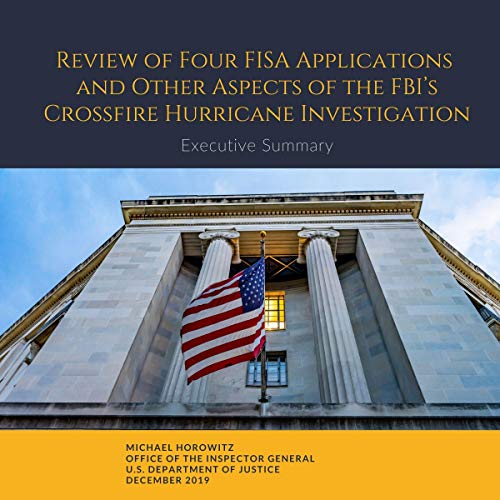 By: Michael Horowitz
Narrated by: Dan Williams
Try for $0.00

On December 9, 2019, U.S. Department of Justice Inspector General Michael Horowitz released a 478-page report titled, "Review of Four FISA Applications and Other Aspects of the FBI’s Crossfire Hurricane Investigation." This is the 19-page executive summary of the full report.

In this review, the OIG examined more than one million documents that were in the DOJ’s and FBI’s possession and conducted over 170 interviews involving more than 100 witnesses. The scope of the OIG’s review included: the decision to open an FBI investigation on July 31, 2016 known as “Crossfire Hurricane” and four individual cases on current and former members of the Trump campaign; the FBI’s relationship with Christopher Steele, whom the FBI considered to be a confidential human source (CHS); four FBI applications filed with the Foreign Intelligence Surveillance Court (FISC) in 2016 and 2017 to conduct Foreign Intelligence Surveillance Act (FISA) surveillance targeting Carter Page; the interactions of DOJ attorney Bruce Ohr with Steele, the FBI, Glenn Simpson of Fusion GPS, and the State Department; and the FBI’s use of Undercover Employees and CHSs other than Steele in the Crossfire Hurricane investigation.