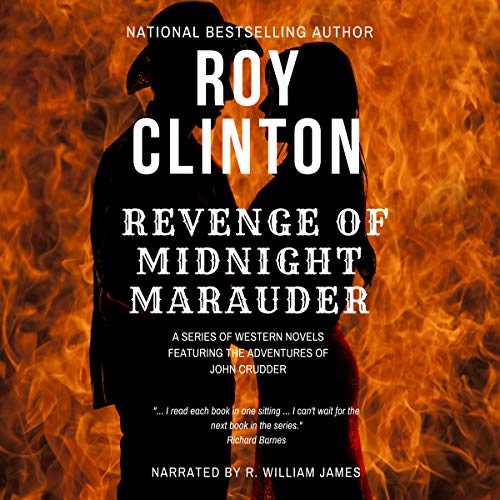 John Crudder is back as the Midnight Marauder, this time facing his greatest challenge to rescue Charlotte Hanson, the woman he loves. She has been kidnapped to force her father to sell the H&F Ranch. Only the Midnight Marauder can save her, and so far, his efforts have proved unsuccessful.

The corrupt politicians in Bandera are surely behind the kidnapping, but they carry on with life as if nothing is amiss. John becomes aware the corrupt town council has highly placed confederates in the governor’s office. Crudder’s quest takes him to the state capitol, where he is determined to weed out everyone who has had a hand in taking Charlotte.

With time running out, the Midnight Marauder unleashes a flurry of revenge that may result in not only his death, but that of the woman he loves.

What listeners say about Revenge of Midnight Marauder

John Crudder is a Hero!

Roy Clinton keeps readers interested in this series from the beginning of book 3. The tension kicks off with John Crudder trying to catch the kidnappers.

“I heard the sounds of horses and Charlotte screaming as I ran outside. I pulled my six gun and would have shot but was fearful of hitting Charlotte. I headed behind the barn to retrieve Midnight and give chase. That’s when I realized they’d taken my horse and Slim’s too. Anger grew in me so great it could only be described as a blind rage. I was determined to find those responsible for kidnapping Charlotte and killing Slim. If it took me my entire life, I would devote myself to seeing justice was served to those responsible.”

John Crudder has a black and white viewpoint on the world. He is all about fair. Going to the mat for his friends and family is what drives his every action in this series. The members of the corrupted Town Council will be held accountable for their greed and injustices, by John Crudder’s delivery of their comeuppance. There is no end to his creative ways of finding each of the culprits and tracking the leader of their group.

The travel back and forth across Texas is very relevant for the western times. Each character is well defined, including Midnight the trusty horse. John will do whatever it takes to get to Charlotte and safely rescue her. For me the story is compelling and a non-stop listen for me.

R. William James keeps the tone and tempo to perfection in this story. He has stayed consistent throughout the series make it delightful. I really think his voice is a perfect complement to this wonderful story by Roy Clinton.
I personally love westerns, especially when they walk the edge of the realistic actions by characters in those times. I can’t wait for the next story, you won’t want to stop once you start this the series.