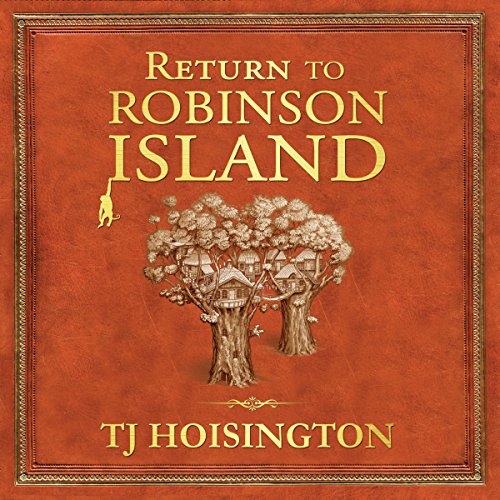 Inspired by the Swiss Family Robinson book written in 1812 by Johann David Wyss, Return to Robinson Island is a continuation of the adventures of the Robinson family 15 years after their famous shipwreck on a remote island in the East Indies.

This entertaining, action-packed, and adventurous story with a thread of romance highlights Ernest Robinson, who is 27 years old, engaged to be married, and a first lieutenant in the British Royal Navy. Ernest has distinguished himself as a fearless fighter, a respected leader, God-fearing, and a loyal friend. However, his loyalty is tested when his commanding officer, Captain Charlie, is court-martialed on war crimes, and Ernest has no choice but to tell the truth, even if his testimony sends his former captain to prison.

When reports reach England that a vast treasure trove has been found on Robinson Island, Ernest and his family find themselves in mortal danger when Captain Charlie vows to retrieve the treasure for himself and wreak revenge on the entire Robinson family. Will the Robinson family survive the attack? Will Ernest ever see his fiancé again? One thing is certain: They won't give up the island or their lives without a fight!

In the author's notes of this audiobook, TJ Hoisington shares additional details and insights around the backstory that were not included in the printed version. Hoisington and Aylesbury Publishing hope you enjoy.

This is a wonderful story and adventure.
I had a calmness over me while listening to the smooth sounds of the narrators voice and the background music.
the cover of the book is simple and classic.
story is filled with descriptions that make you feel like your there with the family and you want to live on the island. I will Definatley share this book with people I talk books with and treasure the hardback copy as well.
I believe this is a story I will listen to more then once when I need a place to travel to in my thoughts.

This book is very well written. I loved the characters and felt like I was there with them. It sure draws you in and makes you feel like you are there with them.
I really liked the audio book. It was real joy to listen too.


After over 200 years the story of the Robinson family continues. In this vividly well-told family favorite, Swiss Family Robinson, "Return to Robinson Island" explodes off the pages and returns you to the swashbuckling south seas. This adventure takes you to a time gone by. Immerse yourself in this high seas adventures, family values, and treasure beyond belief. This book has it all! Author TJ Hoisington presents to you and your family a thoroughly captivating romp through nature, which is sure to be a family classic. The audio version is crisp clean and leaves you hanging on every well-spoken word. This book is a classic. Add this book to your family's treasures today!

It was quite good!

Loved the family values & commitment to integrity in the story. Thankful for clean morals in the story & for clean language. I recommend this book for any age.

Would you listen to Return to Robinson Island again? Why?

YES-I will listen to it again. When I was a young child, Swiss Family Robinson was my favorite book. The way TJ Hoisington has continued the story is amazing! TJ put just enough historical data in the story, but also introduced a brand new adventure. I couldn’t put the book down.

Mr. Hoisington took a balanced approach between adventure, suspense, and romance. It kept my attention the whole time. Also, the book read like I was watching a movie.

What does David George bring to the story that you wouldn’t experience if you just read the book?

I loved his voice! His British accent was engaging.

No. I listened to it over several days.

Great book. I encourage everyone to read it!

Brings me back to my youth

Where does Return to Robinson Island rank among all the audiobooks you’ve listened to so far?

Return to Robinson Island ranks as one of my favorite Audible "Reads." I love the realm of Fantasy: swords shields, magic, pirates are all right up my alley. I've read some of the classic shipwreck stories such as Treasure Island and Kidnapped through audiobooks and this has been my favorite. There is a blend of action, intrigue, betrayal, and romance.

I love that TJ Hoisington stayed true to the form of the original story. In this age of political correctness, he does not remove the faith elements from the story which were so integral to the original. I also enjoyed how he interspersed illusions or elements which reminded me of the 1960 Disney Film. It brought me back to my youth and my love for the story.

I all of the book, but my favorite was (SPOILER ALERT) when Ernest and Elizabeth meet back up together on Robinson Island and make their intentions to get married known.

They survived the island, but can they survive betrayal

Where was this book 30 years ago? Love this story!

If you could sum up Return to Robinson Island in three words, what would they be?

What other book might you compare Return to Robinson Island to and why?

This book has the feel of the old classics like Treasure Island and of course Swiss Family Robinson. I love the classic American lifestyle and the moral compass they all had.

When Ernest created the scavenger hunt for his fiancé and had her running all over town in a romantic chase. I wish I had been that clever with my wife. Then to find out in the author's notes that this scene was taken from the authors own life while dating was the best.

If you could rename Return to Robinson Island, what would you call it?

Loved the book. It was a fun read, brought me back to my childhood.

Great Continuation of a Classic

I recently read the original story and was quite interested in reading the continuation of a wonderful story. I enjoyed listening to this book. Well done!