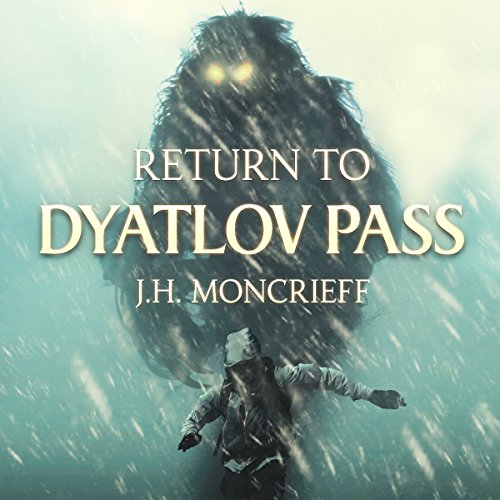 In 1959, nine Russian students set off on a skiing expedition in the Ural Mountains. Their mutilated bodies were discovered weeks later. Their bizarre and unexplained deaths are one of the most enduring true mysteries of our time.

Nearly 60 years later, podcast host Nat McPherson ventures into the same mountains with her team, determined to finally solve the mystery of the Dyatlov Pass incident.

Her plans are thwarted on the first night, when two trackers from her group are brutally slaughtered. The team’s guide, a superstitious man from a neighboring village, blames the killings on yetis, but no one believes him.

As members of Nat’s team die one by one, she must figure out if there’s a murderer in their midst - or something even worse - before history repeats itself and her group becomes another casualty of the infamous Dead Mountain.

What listeners say about Return to Dyatlov Pass

if you're ever wanting some sense of exploration and explanation on the monsters in the story, you will be entirely disappointed. the story ends on a twist ending of a rescue team arriving and the implication the survivor was shot. The character of Steven is extremely aggravating for no clear reason other than he's a prick, people going mad on the mountain is never explained, the snowman are never explained nor described in any detail, and the ending just happens like the author couldn't think of a satisfying conclusion. If you're looking for a horror story involving cryptids, this is not going to be a good pick.

I was so excited for this book because the real life Dyatlov Pass mystery is so fascinating. This, obviously just by the cover, basically took on the yeti theory, with some twists. Some very, very gory twists. The whole book was scary and gory and gave me a really creepy feeling at times, which I love. But the ending? Probably one of the single most aggravating endings I’ve ever experienced. The rest of the book was so, so good and to have it end the way it does is SUCH a buzzkill. I had previously told my sister that she had to read this book, and after I finished it I immediately texted her and told her not to.

Russian and German are not the same language

First of all, Dyatlov Pass is one of my favourite unsolved mysteries and I enjoy all the theories. I also love a good cryptic story, so I was sure I would enjoy this book. But I didn’t for several reasons.
1. Though Russian and German may have a slightly similar accent to an untrained ear, they are not the same language. What ever google translate or other free translating app the author used for the smattering of “Russian” spat out German as well and she clearly didn’t care enough to double check.
2. Are you telling me that a professional journalist who travels the world, trained for 6 months to trek the Pass but didn’t learn even a little Russian? Да, нет, пожалуйста, Спасибо? Typical American to assume that the Russian would know English, so why be polite and make the effort...
3. Also a professional female journalist, didn’t recognise the massive red flags coming from the man gaslighting, trolling, and stalking her?
4. And finally, I had no issue with Andrew being gay, but you know he can just be gay, you don’t need to tell us every time his character is in frame. Give him a love interest (thus showing us rather than telling) or just bring it up if it’s needed, there’s no need for the main character, Nat, to think it every time she sees him. It’s as if his being gay is the only thing she knows about him, which to be fair isn’t shocking considering how vapid and self involved she is.

I wasn’t expecting Shakespeare or anything here, but I expected more from an author who’s been compared to Stephen King and Gillian Flynn. This could have been a fun, if slightly out there thriller. But instead it was just annoying, ignorant, and stupid.

I really wanted to enjoy this, like a lot of people the Dyatlov Pass Incident is something I’ve been intrigued by for ages.
But
- the narration is _terrible_ Marlin’s pitching if voices means some characters are interchangeable and it’s all very declaratory. So much so that for the longest time I wasn’t sure if it was just the narration that kept me from enjoying the story
- spoiler. It’s the story that kept me from enjoying the story, this is like a terrible found footage film where you hate _everybody_ and can’t wait for the monster to kill them all.
- there’s a weird subplot about one member of the group that barely makes sense, which is super tedious.
- the ending is a massive cop out too, imho.

I know Moncrieff has a lot of fans, so this is definitely a “your mileage may vary” review. For the more casually interested listener, I’d recommend listening to the sample first.

Overall disappointing and not scary. Shame

If you are intrigued by the Dyatlov Pass Incident then you may enjoy this book.
There were only two things I did not enjoy - one was the "is he good, is he bad" storyline, which went back and forth too many times; and the other was how abruptly it ended.
Other than that, I thought it was a really good story.