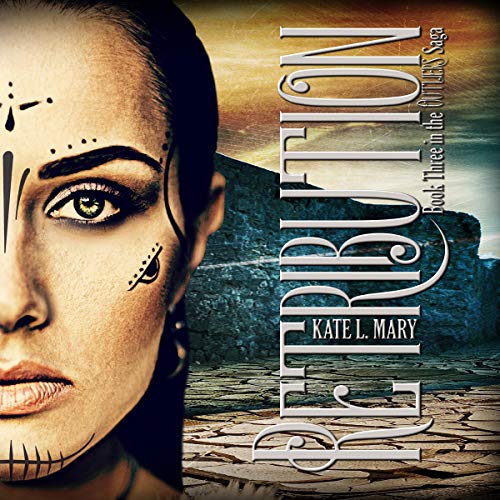 Retribution is the final book in the Outliers Saga.

With the Outliers united and the Fortis eliminated, Indra thought she was nearing the end of her journey. Instead, Asa went into the city only to be captured, and the Sovereign decided to unleash the full power of their technology.

Now, bleeding and separated from her husband and facing a traitor and an uncertain future, Indra finds herself wondering if she united the Outlier tribes simply so the Sovereign could destroy them more effectively.

With vile characters, brutal conditions, and vicious creatures, the final book in the Outliers Saga will take listeners on an unforgettable journey.

Follow Asa and Indra as they fight to start a life together while facing impossible choices that will test their limits and show them what sacrifice, forgiveness, and love really mean.

Retribution is a fantastic conclusion to the Outliers Saga. This was an amazing listen, it's well written with a great plot and intriguing characters. Grace Sylvan did a wonderful job with the narration. I thoroughly enjoyed this audiobook and highly recommend the series.
I was given a free copy of this audiobook at my request and have voluntarily left this review.

The author and narrator do it again!

I was given this free review copy audiobook at my request and have voluntarily left this review. This narrator was perfect! Her slight accent, the deep tone and older sounding tone was perfect for this character in this dystopian book. It was dark and yet powerful. This series is a dark and powerful adventure.

Retribution (The Outliers Saga, #3) was a great read by Kate L. Mary. The Outliers are united and the Fortis are eliminated. Indra thought this was the end of her journey but Asa went into the city and was captured. At the same time the Sovereign unleash the full power of their technology. During all of this, Indra is facing a traitor and an uncertain future. This was a great conclusion to the Outliers Saga. I can’t wait to read more by Kate L. Mary.

Great books! Read the first one and listened to the last 2 on audible - loved that!! The Characters and story are unique and my heart went out to each of them!!

I loved this whole series.

this book is more action packed than the others a bit predictable but still great!

following a cataclysm event a new world emerges. violent where those at the top are evil. the 3rd book in the series and final won't ease up from beginning to end. the characters are rich in personality and the world she creates is beautiful and deadly. dive in from the beginning and go along with the fight to the end to a new beginning.

Just finished the mid book which is the last book in the series. I liked each book and thankful that I recurved the audio version from the author. You won’t regret reading or listening to this series.

So...I hate ending a series, it's always a struggle. But with this one, I couldn't wait to start this last book, and quickly flew through it! I loved all the twists and surprises, many of which I never saw coming, and really felt this ending was just as good, probably better, than the rest of the story, as if it goes out on it's best note, and I loved that!

Loved this final installment! Several twists that I didn’t see coming! I am going to read more from this author.

I think that the author has written better, that said she does set the bar quite high. This book was a satisfying and heart warming finish to the series.

Retribution was a thrilling conclusion.

I received this book via a promo code and this is my voluntary review.

Indra of the Windhi People is now staring down the walls of Sovereign City where her new Husband, Asa of the Forties is being held prisoner. Horrified to realise that the Sovereigns technology is going to make the rebellion that much harder. Now some of her Winta men have been rescued from the Forties Village and Emori has grown confident in her hatred, Indra has to deal with a threat from within her own Tribe.

The Trillyte Tribe have betrayed them, deciding to pull out of the final part of their battle but with the ElectroBubble surrounding the City, it appears they may not have a fight after all. Realizing that the Sovereign may only be bidding their time before unleashing something worse, Indra turns to the Untouchables (descendants of Sovereign or Forties born with birth defects or imperfections, Forties peoples are almost Spartan in their upbringings) to destroy the mirrors kept in the Tower. When the Sovereign launch a counter attack happens on their home valley Indra wonders once again if she's united the Outliers just to lead them to their slaughter.

This story is told in dual POV between Asa and Indra so you get a good overview of the struggle.

So this was a nice ending but left me wanting more. I feel that there is a lot still left answered and lots of areas to explore.

The first book in the series was my favourite new story of 2019.

I’ve scored the narration as a 3 as I love the narrators voice but in this book went between two characters but there was no change in voice making it very difficult on occasion to keep track of what perspective you were listening to.

Fab book and would definitely recommend.

Retribution is the final book in the Outliers Saga.

With the Outliers united and the Fortis eliminated, Indra thought she was nearing the end of her journey. Instead, Asa went into the city only to be captured, and the Sovereign decided to unleash the full power of their technology.
can't believe its the last saga really enjoyed the book thank you Kate L Mary for writing this series and Grace Sylvan who brought it to life