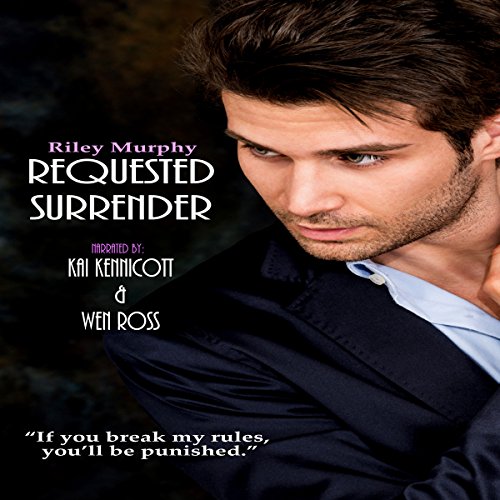 By: Riley Murphy
Narrated by: Wen Ross,Kai Kennicott
Try for $0.00

She knows he's dangerous for a woman like her.

He knows she's perfect for a man like him.

From their first meeting, David Hollan is intrigued because Lacy Pembrook is subconsciously hiding someone. Herself. And David wants to know why. He's patient at first. Willing to give her space, but when she breaks the rules they've set between them, he's ready to hold her accountable. One way or another, he's going to find the piece of her that's yet to be uncovered. And when he does? He intends to own it.

Given an ultimatum after she gets caught coloring outsides the lines of their "trial" relationship, Lacy decides to fall in with David's plans. She'll cancel her trip and spend her vacation time at his house making up for her transgression. No sweat, right? Wrong. What she doesn't count on is him going full-out Dom on her. She quickly learns why they call him the quiet one. He's dead sexy, watchful and stern at the best of times, and now that he has her all to himself, each of those things are magnified tenfold.

By the time Lacy realizes that he's completely subjugated her - by way of an emotional striptease - it's too late. She's bared her soul to him, so when he requests her surrender she has no choice but to give it to him. Or does she?

Note: If you want to check out a few of David and Lacy's "pre-story" dates please go to my website and click on "free reads". Otherwise all their dates have be compiled in the prelude to Requested Surrender in A Date With A Dom.

What listeners say about Requested Surrender

If you could sum up Requested Surrender in three words, what would they be?

What was one of the most memorable moments of Requested Surrender?

Every scene had something memorable about it there isn't anything that doesn't stand out! Riley Murphy is an exceptional author and I love her books!!!

Which character – as performed by Wen Ross and Kai Kennicott – was your favorite?

The main characters David and Lacy!

Where does Requested Surrender rank among all the audiobooks you’ve listened to so far?

This is one of my favorites. I love Riley Murphy's writing, and Kai Kennicot and Wen Ross's narration is flawless as usual.

I loved both the main characters David and Lacy.

Have you listened to any of Wen Ross and Kai Kennicott ’s other performances before? How does this one compare?

Yes, I have listened to all of Kai and Wen's performances and each one is better than the last. They have truly spoiled me. Their level of execution is one to be reckoned with. They are true storytellers and always narrate with so much emotion. It's hard not to feel as if you're part of the book.

Would you consider the audio edition of Requested Surrender to be better than the print version?

Yes because in the audio version, the characters are brought to life.

Yes, I wanted to hear everything this book had to offer in one sitting.

Requested Surrender by Riley Murphy was another great read by the author. I thought that David and Lacy's story was a good and interesting one to read. They decide on a trial relationship, but quickly things change. David quickly shows her full blown Dom. I really enjoyed this book and can't wait to read more by Riley Murphy.

What made the experience of listening to Requested Surrender the most enjoyable?

I loved both Lacy and David. I probably connected more with Lacy, but I often feel more connected to the heroine.

What does Wen Ross and Kai Kennicott bring to the story that you wouldn’t experience if you just read the book?

Awesomesauce. That's what they bring. They make the characters come alive more than my imagination could. And Riley Murphy's incredible steamy scenes sizzle even more.

Yes, I did, but I had to restrain myself because I had to go to work. I hate when real life interferes with my fictional one.

I didn't hear any music in this audiobook at all. I don't know if it was removed after the prior reviews, but it's gone now.

I loved the humorous parts with the dog!

What's with the music

I tried twice to get through this book and could not get beyond a few chapters. The stupid piano tinkling throughout the book drove me to the edge.

it was funny,it made you cry,it had good sex scene in it what I really didn't like was the stupid music in the prelude it was fine but for this book no and sometimes the music was louder the narrator it was just annoying... but it was still good.

The narration of this one sucked me right into this story. I was sure Wen pulled the dom on me. Kai was me. I loved it!

Can just die now of happiness?

Would you listen to Requested Surrender again? Why?

Yes, I would! Its just entertaining.

What does Wen Ross and Kai Kennicott bring to the story that you wouldn’t experience if you just read the book?

The narrator's just did an amazing job.

This audiobook had it all. Fun, sexy and whole lot of humor. I didn't want to put my iphone down . I will be buying the rest of this series. Since it I'm head over heals for this series!!

This book was narrated with background music playing constantly. Very distracting
The music sometimes drown out the narration or made me want to go to sleep yuck

The book was very good, but the person narrating the book was not so great. The piano music in the background was very distracting from the book itself. I love all of Riley Murphy books.

What would have made Requested Surrender better?

I only managed to listen to an hour of this book. For some reason the makers of this audiobook decided that playing slow piano chords and notes in the background was a good idea. It isn't. If I wanted to listen to music when I listen to a book I can sure put some on. But I don't do this because it is distracting from the book, and why it should not be done.

In this case the piano playing is very slow, often with several seconds of silence between each chord or set of individual notes. This is bad because it's the same all the time, and that sucks when stories have light and shade, and slow and fast. In a film they work out music to fit the scene, but if you just play the same stuff in a book and it doesn't fit the mood of the scene that is happening it becomes distracting and quickly irritating. At least this was the case for me.

Have you listened to any of Kai Kennicott’s other performances? How does this one compare?

Yes I have, and she fairly decent narrator. Not the best, but certainly gets the job done.

What character would you cut from Requested Surrender?

Didn't read enough to find out.

Requested Surrender: Trust in Me, Book 4

Who might you have cast as narrator instead of Kai Kennicott?

The reader was OK, but seemed to be unfamiliar with the recording equipment. There were too many instances of phrases repeated twice, or even three times, as though mis-read and corrected without deleting the error.

Really enjoyed this story, but it was totally ruined for me by the irritating distraction of the "mood music" playing throughout in the background. By the time I realised it was going to play right through the performance, I was absorbed in the story.