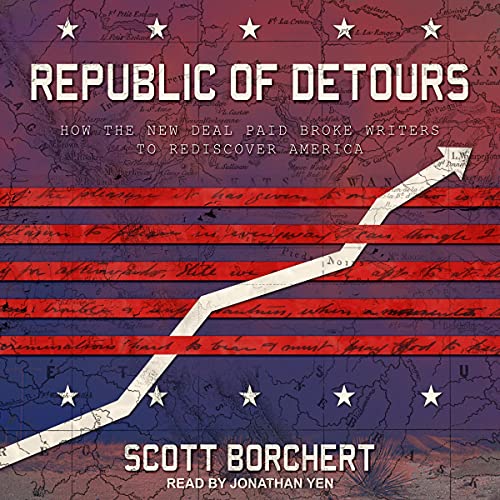 By: Scott Borchert
Narrated by: Jonathan Yen
Try for $0.00

The plan was as idealistic as it was audacious - and utterly unprecedented. Take thousands of broke writers and put them to work charting a country on the brink of social and economic collapse, with the aim of producing a rich and beguiling series of guidebooks to the 48 states.

All this fell within the singular purview of the Federal Writers' Project - a division of the Works Progress Administration founded to employ jobless writers, from best-selling novelists and acclaimed poets to the more dubiously qualified. It was a predictably eclectic organization, directed by an equally eccentric man, Henry Alsberg. Under Alsberg's direction, the FWP took up the lofty goal of rediscovering America, and soon found itself embroiled in the day's most heated arguments regarding literary representation, radical politics, and racial inclusion - forcing it to reckon with the promises and failures of both the New Deal and the American experiment itself.

Republic of Detours tells the story of this raucous and remarkable undertaking by delving into the stories of several key figures and tracing the FWP from its optimistic early days to its dismemberment by the House Committee on Un-American Activities.

What listeners say about Republic of Detours