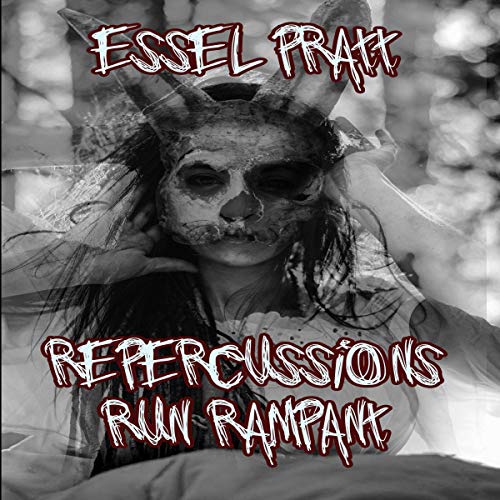 Repercussions of one’s actions are often not realized for many moons. Usually, such retorts result in minor inconveniences that merely mar the soul and bruise one’s pride. However, when repercussions run afoul, evil in its purest form reveals her damning desire to push one over the edge.

These are those stories.

Repercussions run rampant, tales of revenge, regret, and retribution. No one is safe as the darkness within guides one’s will and chooses the path to follow.

I can really appreciate a dude who likes alliteration, since I adore it, and Pratt proves he's professional enought to pull it off with aplomb. This book blasts out a bevey of bad-arsed babies that will blow your mind. The stories ran a range of tales, and none repeated a theme of revenge or retribution. While I do enjoy Pratt, there were one or two OK stories that weren't bad, but the majority were fun and creative tales of people getting theirs. . . or not. Pratt is a slick writer who knows how to vary up his writing, one second he's kicking butt with a B-movie monster and the next he's battling evil forces in New Orleans, or even having Ann Frank chat with Hitler. He is crazy, but in a really good way.

Alyssa Williams does a really nice job narrating. I hadn't heard her before all of this, but I think she did an excellent job. I always feel a little sexist when I think that a man should do the voice for a story regarding a man, and vice versa, but I think she did well, and can appreciate her work here.

So, if you are looking for a great collection of short stories then look no further, this book will show you what Karma is all about. Even though I did receive a promo code for this review it in no way influenced my considerations of the material, and in fact, inspired me to be more honest. Getting a code generally makes me harsher as a reviewer as I am more often concerned what someone like Me will decide based on my review.

What astound me the most about this book was the vast range of stories. You never knew what to expect, and that left you anxious to hear the next story...and the next...

The stories, like the book, were completely unpredictable. Sad ending? Happy ending? Something from left field? You never knew. All were unique and highly imaginative. I was very impressed with this book.

Loved the narrator too. I wonder what she thought as she went through this book, haha. She had to present an entire range of character voices in a variety of situations. Nonetheless, she stepped up to the plate and did a great job. Not a small task.

Essex Pratt is definitely a wordsmith: he is almost poetic, very descriptive, and can turn a phrase. The stories run from mediocre to very imaginative. Some are gory, most disturbing, with only one happy ending that I can remember.. I think all would fit into the horror category. Alyssa Williams is a good narrator, but a male voice would be a better fit for many of these stories since most are told from a male’s perspective. So if you like imaginative, disturbing stories, and don’t mind a sometimes incongruous voice, then this collection is for you.