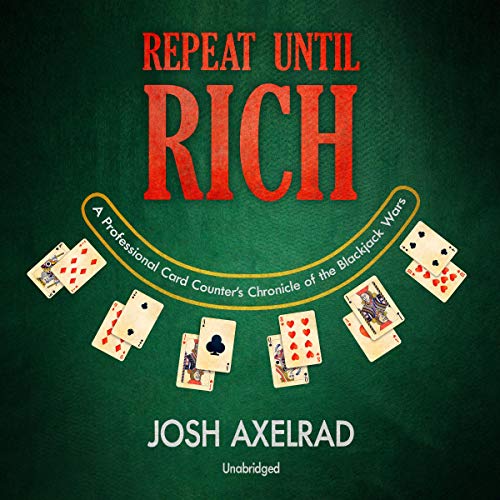 A deliciously wry, edge-of-your-seat memoir of making a fortune with card counters across a wide swath of blackjack in America

At 24, Josh Axelrad held down a respectable and ominously dull job on Wall Street. Adventure was a tuna fish sandwich instead of the usual turkey for lunch. Then one night, a stranger at a cocktail party persuaded him to leave the nine-to-five behind and pursue an unlikely dream: the jackpot. The stranger was a blackjack card counter, and he sold Axelrad on the vision of Vegas with all its intrigue, adventure - and cash.

Repeat Until Rich is Axelrad's taut, atmospheric, and darkly hilarious account of ditching the mundane and entering the alternative universe of professional blackjack. Axelrad has one thing in common with his team: they all thrived in the straight world, found success boring, and vowed to make life more exotic. Axelrad adopts Jon Roth's "repeat until rich" philosophy - and from his strategy and skill spring hasty retreats across casino floors, high-speed car chases, arrests on dubious grounds, and the massive cash paydays that make it all worthwhile.

Filled with actual bad guys, chase scenes, and high stakes, Repeat Until Rich offers an intoxicating, unprecedented view of the dangerous allure of living off the cards and one's wits.

What listeners say about Repeat Until Rich

This book was so annoying to listen to. The reader, who is also the author, is this smug liberal who has never held down a job. If you’re looking for a similar book but 10 times better, listen to The Blackjack Life.

Similar story to Bringing Down the House by Ben Mezrich, but with lower highs and sadder lows. Better to read that book

extremely boring, nothing many of movies haven't gone over. don't waste your time, the voice is okay.

The author, even while working through the story as it is written, has thought out this book meticulously. I think this is an excellent read. I would say that the story does get a bit stale from around chapters ten to twenty - but overall, this made no effect on my experience. The book gave me memories of NYC and Vegas, as well as exceptional detail and recognizance. It’s honest, brutal, vivid - and well worth a read. My favorite bit was chapter thirty-seven.

First half was great the 2nd half I half listened

basically just like I wrote above I found the card counting in Vegas and throughout the country extremely interesting especially having lived in most of the city talked about but the going back to New York for the poker addiction maybe it was because it was audio but listening to 12 minutes of poker buy ins put me to sleep.