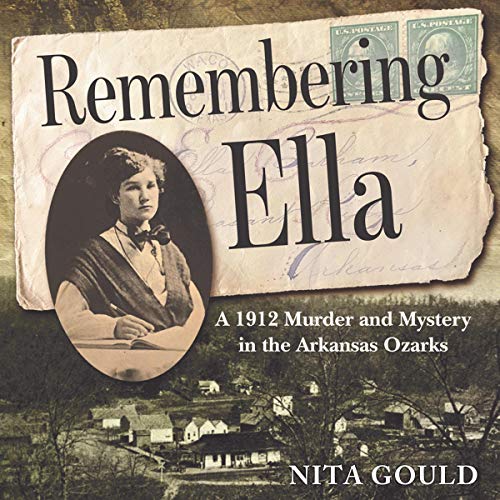 Remembering Ella: A 1912 Murder and Mystery in the Arkansas Ozarks

By: Nita Gould
Narrated by: Darla Middlebrook
Try for $0.00

In November 1912, popular and pretty 18-year-old Ella Barham was raped, murdered, and dismembered in broad daylight near her home in rural Boone County, Arkansas. The brutal crime sent shock waves through the Ozarks and made national news. Authorities swiftly charged a neighbor, Odus Davidson, with the crime. Locals were determined that he be convicted, and threats of mob violence ran so high that he had to be jailed in another county to ensure his safety. But was there enough evidence to prove his guilt? If so, had he acted alone? What was his motive?

This examination of the murder of Ella Barham and the trial of her alleged killer opens a window into the meaning of community and due process during a time when politicians and judges sought to professionalize justice, moving from local hangings to state-run executions. Davidson’s appeal has been cited as a precedent in numerous court cases, and his brief was reviewed by the lawyers in Georgia who prepared Leo Frank’s appeal to the US Supreme Court in 1915.

Author Nita Gould is a descendant of the Barhams of Boone County and Ella Barham’s cousin. Her tenacious pursuit to create an authoritative account of the community, the crime, and the subsequent legal battle spanned nearly fifteen years. Gould weaves local history and short biographies into her narrative and also draws on the official case files, hundreds of newspaper accounts, and personal Barham family documents. Remembering Ella reveals the truth behind an event that has been a staple of local folklore for more than a century and still intrigues people from around the country.

What listeners say about Remembering Ella: A 1912 Murder and Mystery in the Arkansas Ozarks

This author clearly did extensive research on the murder of Ella and everyone and everything surrounding the tragedy. This is to be credited. However, there is a lot of reading of long passages from letters, newspaper articles and various court documents that do not add anything to the story. The author has done an excellent job of NOT sensationalising the murder. The one attempt at descriptive/ emotive writing (waking up and driving to the cemetery) was really quite juvenile: something I would credit to a high school student.
The narrator/ reader has a monontous voice which adds nothing, especially in the last few chapters which is simply a recitation of facts.
This book should have been half the length and had far less detail. Do NOT read this unless you have a specific interest in historical minutiae relating to the Ozarks.

The writer did a fabulous job at providing every detail possible. This made it easier to comprehend the people and the time in which they lived. A tragic but very fascinating true crime story.

Just no 'there' there

This audiobook claims to be a little over 13 hours, but it seemed to be interminable. That is due, in part, to massive amounts of extraneous, and usually irrelevant, material. Every single coroner's inquest, grand jury and trial jury has a roll call, and each name of anyone who served on juries is read off. At first, I expected that there must be some payoff, like those names will be important later in solving the mystery. Nope. Just names. In the criminal trial phase, I started to think that it would get meatier. It was rather comprehensive, I'll admit. But with all the minutiae, commentary, objections, etc. that are detailed, it's presented in such a pedestrian manner that there was zero dramatic tension. A little narrative skill on the author's part could have gone a long way. But then, in the aftermath and appeals phase, she ups the ante on dreary detail. And finally comes the seemingly endless afterwords, epilogues and appendices, none of which provide any more insight to the main story, which should have been about Ella.

Now, I'm all for correcting judicial injustice, and am fully aware of the problems in the system, and can certainly understand that it was probably even more problematic a century ago. But even by the most liberal of standards, the supposed injustice are such tangential technicalities which hardly rise to the level of outrage. The defendant not being in the court for the reading of the verdict being one of the main issues. The argument being it adversely affected the opinion of the jury... which had already reached its verdict. And the defendant's absence was ostensibly for his protection. In any case, despite the irregularities, there is really no miscarriage of justice in this story, as the public may rightly consider egregious these days. Do I know if the right man was convicted? No, but nothing in this book even comes close to casting any more doubt on whether justice was correctly dispensed in this case.

But finally, the enduring memory of this book will be the stultifying inane voices employed by the narrator. It got so bad, that I started trying to identify sources. I figured out there was something like a Bob Dylan circa 1965 voice, a Strother Martin, and what I could only describe as a Nina Simone impersonation. And there is a the slack-jawed yokel voice meant to represent the undereducated defendant in his love letters to Ella, which I can only imagine would be highly offensive to Ozark locals.

Nothing much to see here. Probably best to give it a miss.

A murder that happened more than a hundred years ago.
It's a long book full of details and facts.
Well written and researched.
Was he guilty? He probably wouldn't be convicted on the evidence today.
I received a free copy of this audio book at my own request and voluntarily leave this honest review. .