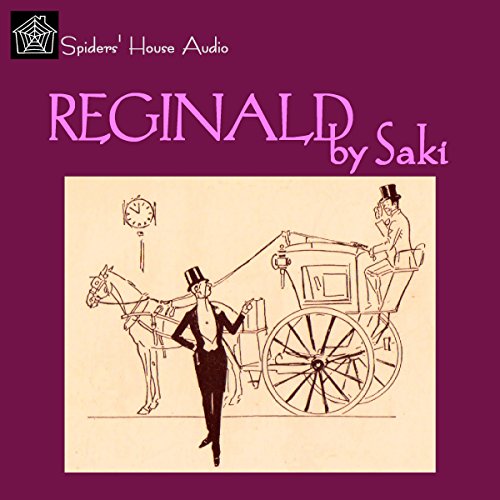 Reginald, published in 1904, was the first of Saki's collections of short stories. The eponymous Reginald is an effete, cynical young man-about-town whose character is a vehicle for Saki's delicious biting wit satirizing Edwardian high society.

Hector Hugh Munro, better known by his pen name, "Saki", was born in Burma in 1870, where his father was a senior official in the Burma Police. From the age of two, he lived with two maiden aunts and his grandmother in Devon and was educated in Exmouth and at the Bedford Grammar School. Later he travelled in Europe with his father. He joined the Burma police but resigned after a year because of ill health and returned to England, where he began his writing career as a journalist and short story writer for magazines and newspapers such as The Westminster Gazette, in which the Reginald stories first appeared.

Saki is regarded as a master of the short story. At the start of the First World War, he refused a commission, enlisted as a private, and went to France, where, in November 1916, he was killed by a shot to the head, his last words being, "Put that bloody cigarette out."

What listeners say about Reginald

I love Saki - this is *horrible

I've kept a Saki book next to my bed for years and frequently reread a random short story before going to sleep.
I was hoping I could do something similar with this and my commute - but it's very clearly not going to work and the reason is the format.
Rather than the titles of the 15 stories the 'chapters' link for the book lists all chapters simply as "Chapter 4" etc. along with how long it is. This is less than useful and considering how easy it would be to fill that information in it makes me a bit angry that I paid for this.

The voice actor seems to do a decent job, however everything I've listed to sounds like it was recorded from within a tub.
I thought this might be my sound settings so I tested a few random youtube videos and ... nope ... it's this recording.
They should have hired a sound person.

I would return this if I could but apparently you can only return Audible stuff if you pay a monthly membership fee.