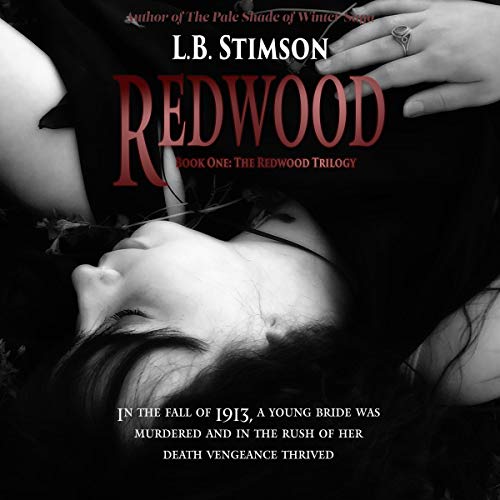 A Modern Gothic Horror Saga In the fall of 1913, a young bride was murdered and in the rush of her death vengeance thrived. Set against the historic backdrop of northern California's wine country, The Redwood Trilogy follows three generations of the MacKenna family - a family torn apart by sins and secrets of the past.

"And, the entire time it was there with him. He could feel its presence against his back. He could see the shadow twisting and following in the black of the night. He told himself it was only the shadows cast from his lantern but his heart beat with the truth he could not, would not, utter aloud. She was thriving in her death, fueled by the darkness and the cold. She was thriving and taunting him with the rot and decay of the vineyard."

What listeners say about Redwood

Redwood by LB Stimson is Book 1 in the Redwood Trilogy. This is the story that revolves around the Redwood vineyard and the family behind it. James MacKenna gets married to Autumn, the daughter of the owners of Redwood. Autumn has an unfortunate passing at which time the vineyard suffers and everything that happens afterward is seemingly tied to Autumn's spirit. I don't want to give anything away, but it's classic horror and quite an enjoyable story!

Jennifer March did a great job narrating this story. She brought life to the characters and was an excellent choice. I'm looking forward to finishing the next book in the series, which I'm currently listening to now. I was voluntarily provided this free review copy audiobook by the author, narrator, or publisher for an honest review.

Redwood for the win

Story took me on an unpredictable journey, the characters were very interesting and each one was brought to life by the narrator. An excellent combination of a great storyline and a narrator that enhanced the entire experience. Loved it.