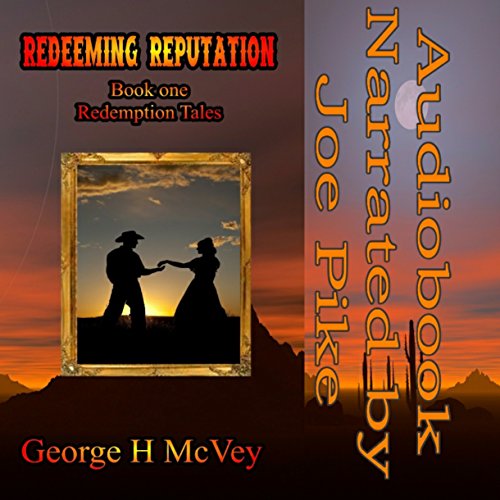 Nathan Ryder wants nothing more than to get to Redemption, New Mexico, and start his career as a circuit riding preacher. He stops to meet up with his grandfather in Franklin, Missouri only to find that his grandfather has died.

He steps in to save a damsel in distress and at the end of the night Nathan has gained the reputation as a fast gun hand. Every time he tries to be who he thinks he's supposed to be another gunslinger comes and the body count rises. Nathan's anxiety rises with it. How does a man who is called to save sinners from the pits of hell reconcile that he is responsible for sending some there personally?

How will he reconcile his talents with a gun and the reputation he's gained with the one he wants to have, as a man of God and peacemaker? Especially with the area's most notorious gunslinger dead set on a showdown. If he only knew how to have a Redeeming Reputation instead of the one he stumbled into.

What listeners say about Redeeming Reputation

I received a free audiobook version of Redeeming Reputation from George McVey in return for an honest review!

As soon as the audiobook started, I was hooked! The rich deep western voice was like a mother’s melody to me! I was instantly transported and the words of this wonderful story came alive for me!

This is the tale of a preacher on his way west. He comes into trouble on the train and needs to get off to answer questions for the local Sheriff. He grabs his gear and horse knowing he won’t be able to continue on this train. He rides hard to the next town where he’s meeting his Grandpa so they won’t miss each other and trials and temptations push his human limits. He is confronted with his own weakness and must turn to God often to reign in his flesh and give it all to God! The rest of the story takes place in the town where nothing is easy and salvation is a gift of God! George McVey uses his knowledge and experience as a retired preacher to tell this beautiful tale of God’s redemption and love for all men. George is a new author for me, but if this book is any indication, I will be a faithful reader of both his fiction and nonfiction books!

bought for awesome narrator but

this is wsyyy too preachy-bibley. the narrator is, however, fabulous
great range of voices and stellar sam elliott sound