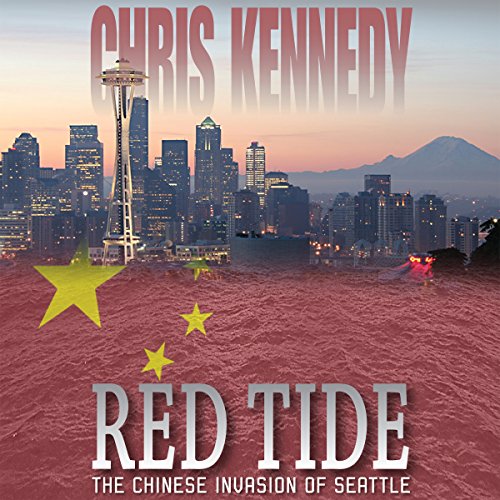 By: Chris Kennedy
Narrated by: Craig Good
Try for $0.00

Analysts have long predicted that China would go to war to reintegrate the province of Taiwan. It isn't a matter of "if"; it's a matter of "when". For decades, the only thing that has kept China from invading Taiwan is the American promise to defend it, even if that means World War III. To date, China has not been ready to go that far. But what if China figured out a way to put the United States on the sidelines of their fight to regain Taiwan? Would they do it then?

Drawn from today's headlines, Red Tide: The Chinese Invasion of Seattle, is set in a not-too-distant future where China decides to invade Seattle to use American citizens as high-stakes chips in a game of nuclear blackmail. Will the United States get Seattle back? It will, if a shot down F-18 pilot, a retired Navy SEAL, and a platoon of Army Rangers have anything to say about it.

Written by a former aviator with over 3,000 hours flying attack and reconnaissance aircraft for the United States Navy, including many missions supporting US Special Forces, Red Tide: The Chinese Invasion of Seattle, is a look at one possible future that isn't as improbable as you might think. Events in it are not only possible, they're already happening. Could China attack the United States to get back Taiwan?

We thought the war against China would be fought in Asia, not Seattle. We were wrong.

What listeners say about Red Tide: The Chinese Invasion of Seattle

it was okay, but to me it focuses too much on the Chinese as I don't think the US citizens would lay down so easy

Quite a good book

This book is actually quite good. It may not be perfect but I enjoyed the plot, dialogue, and narration. I could easily see something like this happening as we take so much for granted when we deal with other countries.

I will soon be reading the second book to find out what happened.

given the dates involved, this is just terrifyingly current and quite plausible. well worth reading

Red Tide.
Really good entertainment. fast paced and full of detail.
Surprisingly the US military seems to be getting the worst of the invasion.
Maybe the next book will turn the tide.
This book has action but it is really a set up for the rest of the series.
I received a free copy of this audio book at my own request and voluntarily leave this honest review. .

I wasn't sure at first wren I started reading this I was thinking there is no way they could get away with it.
But after a few chapter's I thought with what the did how they did it this could work.
I'm sure you will just as amazed and entertained as I was by action in this book and come to admire like and hate the characters in this book just as much as me.