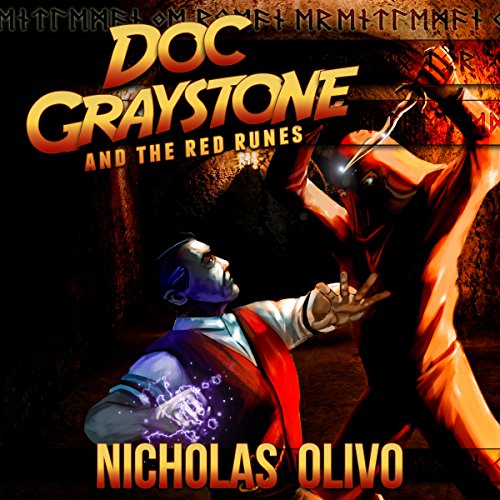 By: Nicholas Olivo
Narrated by: Gregory Peyton
Try for $0.00

Boston, 1932. The police are baffled by a series of killings in which mystical runes have been carved into the victims' flesh. Desperate for help, they turn to Doc Graystone, gentleman necromancer.

Graystone quickly finds there's more than murder afoot as he runs afoul of demons, revenants, and ragmen. But when he learns the very fate of the world is at stake, can he stop the diabolical Runemaster in time?

What listeners say about Red Runes

Loved every minute of this book... too short...I wanted more. it was, however, truly the narrator that brought real magic to this piece.... the characters were so alive it felt like watching a movie!!! Can I have some more please?!?

A Good Start to a Historic Urban Fantasy Series

Some stories work well in a shorter, but I found myself wishing that this one had been longer just to flesh out the characters a little more as well as the historic, 1930s era in which the events take place. Instead we leap right into relationships we have to take for granted and only get passing references to things like the Prohibition. However, it has peaked my interest to continue with the next book in the series.

If you’ve listened to books by Nicholas Olivo before, how does this one compare?

I've listened to the entire Caulborn series and can enthusiastically and unabashedly recommend that series -- both in terms of it being an excellent story, but having an incredibly expressive narrator who brings the book and every character in it to life. It also provides an interesting twist on urban fantasy, in a genre that (IMHO) has grown a bit stagnant and over populated with every new author and their neighbor producing a new urban fantasy novel on a monthly basis. Unfortunately, I wasn't as taken with this book, but I think a lot of that has to do with my dissatisfaction with the narration style.

What aspect of Gregory Peyton’s performance would you have changed?

The pacing of his narration and limited expression in his voice. Mr. Peyton does an excellent job differentiating among characters by changing the accent of his voice. However, I found his voice was too even-sounding for the most part. What engages me with the most dynamic audible narrators is their ability to make each sentence come alive just by the expression they use to utter each sentence. They don't just read the book, as they act it out. Their voices might gain in intensity or loudness or speed up the pace during action scenes.

For the most part, Mr. Peyton's voice, even while voicing the characters, remained so smooth and even toned that I gave up trying to listen to this audio book while on my morning commute, and instead listened to it at night while getting ready for bed, because there wasn't much excitement or expression in the narration to keep me alert. While I initially appreciated the fact that he gave the main character, "Doc Gravestone," an English accent, somehow it ended up making the character seem incredibly snobbish, emotionless, and arrogant. I'm not sure I would have ended up with that same impression had I read the book, instead of listening to it.

Yes! I'm both a fan of history, love Boston, and am a sucker for the urban fantasy genre. There are some great elements in this story and I loved how the author portrays necromancy as just another magical ability -- sure it freaks people out, but it's not this sinister, evil dark magic that will corrupt the souls of those who practice it.

On the whole, I think Nicholas Olivo is a talented, interesting, and innovative author. I just wish he had gone with a different choice of narrator. I'm sure Mr. Peyton did his best, and he is incredibly good a different accents, but this narration style fell flat for me. I might have enjoyed this story more had I read it instead of listening to it.

A great intro to the Doc Graystone series!

What made the experience of listening to Red Runes the most enjoyable?

As a fan of the Urban Fantasy genre it was a refreshing twist to listen to a story set during the Roosevelt era before the end of prohibition. Our modern technology being completely absent gives Doc Graystone's necromancy an extra level of import.

Have you listened to any of Gregory Peyton’s other performances before? How does this one compare?

I have not but Mr. Peyton is a talented performer. He smoothly transitioned between characters and narration that at several points I forgot it was only one person performing.

My only constructive criticism stems from the quality of the recording. While Mr. Peyton wonderfully portrayed Mr. Olivo's work there was a slight echo/tinniness to the recording that was distracting at times.