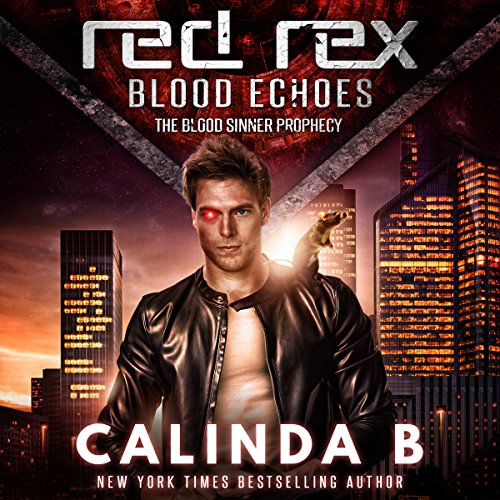 "Your true name is Red Rex. The baddest of badasses, an alpha warrior beyond compare..." Or, at least, that's what he's been told.

Eighteen-year-old Gaige Dupond has his life all mapped out. Lose his virginity to Emily. Get married. Become a pro soccer player and travel the world.

His father, a pure-bred Deltarc from another planet, whose race is growing extinct on planet Earth, has other plans - either confirm that he truly takes after his warrior father, and not his dearly departed empath mother, or snuff out his existence.

All plans go awry, however, when the dangerous red darkness in Gaige is awakened like a beam of hell flickering from his right eye, in a brutal ceremony. Pursued by a vicious Deltarc bounty hunter, Deltarc tracking hounds and his father's wicked minions, he loses his home, his life, all that he holds dear in pursuit of the truth.

In his quest to find his mother, victim to a corrupt cryopreservation project in outer space, and right the wrongs inflicted on him, he finds something far darker - his own sinister motivations and the need to feed on something other than human food. His only companion, a lab rat refugee named Sojourn, Gaige knows he'll never be loved - not in the way he'd always envisioned. Will he find the revenge he's seeking, or will he become an evil replica of his father? That's the last thing he'd ever wish on himself, but it may be his only option for survival.

Loved reading this book but hearing it! WOW!

Would you listen to Red Rex: Blood Echoes again? Why?

Yes, the story is intriguing but when you add hearing the characters tell it. Amazing

What other book might you compare Red Rex: Blood Echoes to and why?

I am not good at comparing books but this is a must listen to!

I liked the variety in character voices. S. Johnson really brought them to life for me.

At times I cringed, at times i smiled and laughed.

Would you consider the audio edition of Red Rex: Blood Echoes to be better than the print version?

Calinda B has crafted a very intricate, well described story. I had no problem visualizing the worlds she created.
Gaige is a normal boy attending high school, playing soccer and in love with his girlfriend Emily. He suddenly faces a very violent coming of age at the hands of his father. While he searches for his mother with the help of his teacher, an older woman and an escaped lab rat, he learns to use his new powers. As he finally accepts himself for who he is now, all of his other problems work themselves out.
I absolutely loved this story. Kudos Calinda.

Would you try another book from Calinda B. and/or S. Johnson?

I tried multiple times to finish this book. I just couldn't do it. This audiobook was given to me for free through Audio Blast for my unbiased review.

The audible disclosure is worthy

Wow, a wonderful and suspenseful listen from the very beginning. This action-packed listening had me enthralled from beginning to end. With turns and twists. This author has done a great job with epic scenes to carry out this epic listening. I recommend it, certainly.

An impressive Audio-book for beginners!

This audio-book is full of action, risk, suspense, and to the very end, I had no trouble getting totally absorbed in this story. I strongly recommend that everyone listen to this, and in return for an honest review, I received a copy of this audio-book.

This is really great audio-book!

I really enjoyed listening to this particular and exciting story! To create a wonderfully refreshing and unique story, the worlds created here and the complexity of the characters all add to it, and I can't wait to hear more from this author!

It brings deceit, manipulation, greed, thrill, adventure, and victory to this sci-fi thriller. The great main character is Gaig Dupont. Add this audio-book and the brilliant art of this audio-book writer to a great story.

That's exactly what I'm looking for!

I got a copy of the arc and I want to review because this was such a perfect listen that I couldn't put down because it was so wonderful.

I enjoy wearing science fiction all the time, anyway. It was more than I expected, and until the end, I heard it. And hints of romance and plenty of activities, science fiction/fantasy. This audio-book is highly recommended to everyone.

I don't really know what I just listened to which is why I'm saying it was pretty good - Gaige has a manipulative, well let's just call it what it is - evil father who does the most atrocious acts to his son. So Gaige is basically abused by his father and goons and Red Rex comes into existence. Gaige fights his inner Red Rex for awhile until he finally just gives up everything he holds dear to him and becomes Red Rex in full. Very erotic scenes throughout the read / listen and believe it or not there is a HEA. I will say that it was an absolute pleasure to listen to this narrator. S Johnson could read to me anytime!!! He not only made this character but helped to elevate this read in my opinion.

What did you like most about Red Rex: Blood Echoes?

Gaige’s father turns his entire life upside down by setting something loose inside Gaige and now he’s on the run trying to dodge his father’s trackers all while trying to control the red darkness inside before he turns evil like his father in this exciting sci-fi romance. A great plot.

What was one of the most memorable moments of Red Rex: Blood Echoes?

The scenes are vivid and brilliantly detailed and the details capture the imagination and bring the story to life while the world draws the reader into the story. The characters are brilliant, engaging and grab your attention from the very beginning.

It's got everything from action to suspense and a romantic interest all packed into a great story.

Will he become his father? Can he accept himself for who he is now?