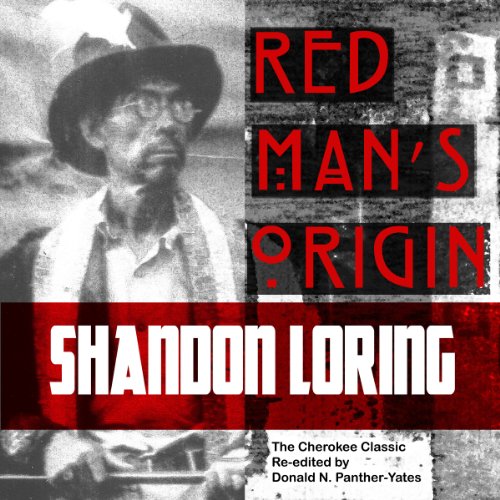 By: Donald N. Panther-Yates
Narrated by: Shandon Loring
Try for $0.00

In the world of Native Americans, oral communication takes the place of the written word in preserving their most valued texts.

By a miracle of transmission, here is the earliest and most complete version of the story of the Cherokee people, from their origins in a land across the great waters to the coming of the white man. In olden times, it was recited at every Great Moon or Cherokee New Year festival so it could be learned by young people. It was set down in English in an Indian Territory newspaper by Cornsilk (the pen-name of William Eubanks) from the Cherokee language recitation of George Sahkiyah (Soggy) Sanders, a fellow Keetoowah Society priest, in 1892.

We do not have anything anterior or more authentic than Eubanks and Sanders' "Red Man's Origin". Mystic and plain-spoken at the same time, "Red Man's Origin" tells how the clans became seven in number, reorganized their religion in America and struggled to maintain their "half-sphere temple of light". You will hear in Cornsilk's original words about the true name of the Cherokee people, the totem Uktena serpent, divining crystals of the Urim and Thummin, the terrible Sa-ho-ni clan and other Cherokee storytelling subjects. The brief narrative is here reprinted with an introduction by Cherokee author Donald Panther-Yates.

It's a pleasure to hear my fore mother's heritage. They have been afraid to tell it because of who might hear. Thank you.

Donald Panther-Yates discovers a rare find and brings it back from dusty forgotten pages to share with us from Panthers Lodge. “Red Man’s Origin” was first published in 1896 in the Indian Chieftain, a Vinita, Oklahoma newspaper. It is the words of George Sahkiyah “Soggy” Sanders who became a Senator from Oklahoma though he spoke little English nor wrote any Cherokee. His word were translated by William Eubanks.

What unfolds is an amazing story of leaving flooded homelands, splitting of the tribe into different languages reminiscent of the Tower of Babel story in the Bible. They leave their lands, travel a long distance by water and land in the New World. They reconstruct their remaining clans into 7 based on the Yohna Constellation. You will find out which one that is in the book. They lived a peaceful existence for many years that were attacked by foreign Dark Invaders they defeated twice. Then the White Man came. Friends that became the Ancient Version of Frenemy. You will be amazed at the Cherokee Version of their own story.