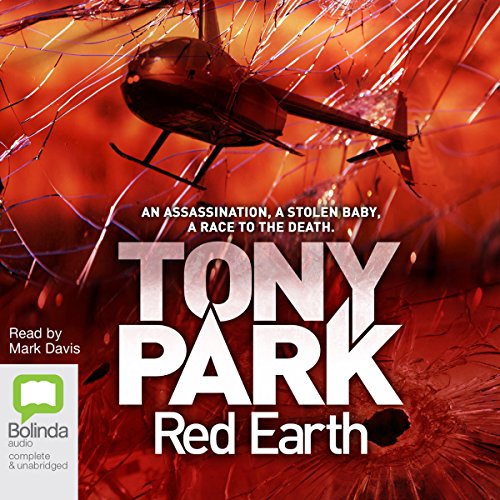 An assassination. A stolen baby. A race to the death.

Durban, South Africa, a car is hijacked. Suzanne Fessey fights back and kills one thief but the other, wounded, escapes with her baby on board.

In pursuit of the missing vehicle and baby are helicopter tracker pilot Nia Carras from the air, and Mike Dunn, a nearby wildlife researcher, from the ground. But South Africa's police have bigger problems: a bomb has gone off in Durban, killing the visiting American Ambassador, and chaos has descended on Kwa-Zulu Natal.

As the missing baby is tracked through the wild game reserves from Zululand to Zimbabwe, Mike and Nia come to realise that the war on terror has invaded their part of the world.

"One of [Australia's] best and most consistent thriller writers." ( The Daily Telegraph)

What listeners say about Red Earth

I did stick it out to the end but it was tough going.
I found the plot rather poor and the unlikely escapes from a variety of predicaments too far fetched for the story to be credible.
Some of the conversations used language which didn't seem to suit the characters and the whole thing seemed to drag on!
I wouldn't recommend the Author and won't be listening to any other titles of his.

This is a great adventure story, one to really get your teeth into.
The narrator is not bad but has no idea of South African accents which were not good; the horrible pronunciation of South African names and words really set my teeth on edge.

I nearly lost the will to keep on listening when ' bliksem 'was pronounced as 'bleaksome' - ag sies !

South Africa has great actors who could provide a way more authentic narration, this is a real pity as it definitely detracts from the flow of the story.

I really enjoy Tony Park books. This is a great mix of action and intrigue, with real life experiences and emotions in the mix. I enjoyed visiting familiar places marred only by the dreadful pronunciations. Yet again we have a narrator who can't pronounce names of people and places properly, which is both annoying and distracting. I also felt the narration in general was lacking in passion and sounded stilted in many places. I read these books because I come from Southern Africa and can relate to the places and characters, and I can't believe there isn't a narrator who can read these books properly and with the feeling needed. It does make me think twice before listening to another of Tony's books, even though I do like the stories!

Another good book from Tony Park, maybe his best. The narration was excellent.
Thoroughly enjoyed the story.

Park back to his best

Entertaining from the beginning to the end and kept the reader guessing.

Susanne Fessey Such a nasty piece of work.

What does Mark Davis bring to the story that you wouldn’t experience if you had only read the book?

Tony Park wrote a couple of below standard books but this back to Sivory & Silent Predator quality.